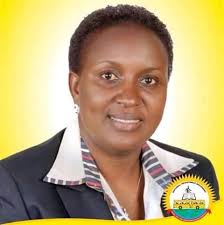 Ibanda Woman Member of Parliament Jovrine Karisa Kyomukama and two other people have been summoned over assault. Kyomukama and her brother, Julius Katusiime together with another person identified as Afra Nyamwiza are expected to appear before the Ibanda Chief Magistrate on Oct 14th, 2020 to answer charges of causing bodily harm to Innocent Amwine, the Ibanda District Deputy NRM party Registrar.

Amwine, in his statement at Ibanda Police station claims that Kyomukama attacked his home on one Sunday evening, kidnapped him and his son and took them to unknown place where she tortured them. She later went to the NRM party offices a day after the NRM primaries for parliamentary candidates and tried to force him to declare her winner of the polls.

According to the victim, Kyomukama was given sufficient time for reconciliation in vain.

“You are hereby commanded to appear before Chief Magistrate at 9:00am in the morning or as soon thereafter as the case can be heard,” part of the summons reads.

According to Court records, the registrar filed the charges against Kyomukama and Katusiime after the NRM party primaries three weeks ago.

The legislator who was recently declared winner by the NRM Electoral Commission Chairperson Dr. Tanga Odoi, has confirmed receiving the summons.