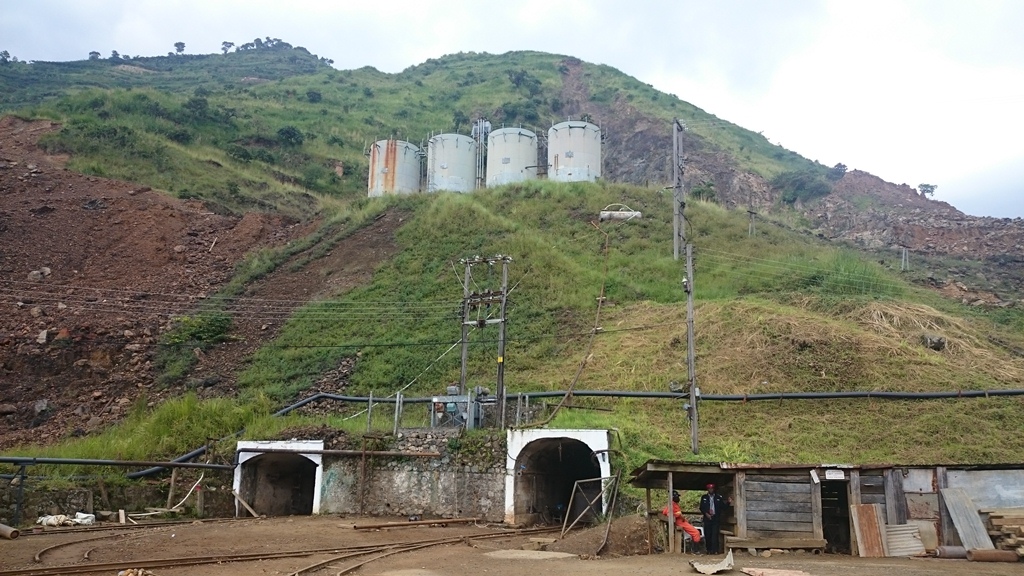 Kilembe Mines is located in Kasese district, at the foot of the great Rwenzori Mountain ranges. Copper mineralization in the Rwenzori Mountains is reported to have first been recorded in 1906 and has been explored since the 1920s.

In 1950, Kilembe Mines Limited (KML) was incorporated and production began in 1956. It steadily increased to a peak of about 18,000 tonnes of copper cathode per year in the early 1970s. The operation included a copper smelter in Jinja, and copper concentrate was transported by the railway from Kasese to Jinja. The Government at the time acquired a controlling stake in the mine in 1975 when operations were due for recapitalization, which was not done, and production had to be suspended in 1977.

Copper extraction ceased in 1982 due to the degenerated smelter in Jinja, the global collapse of mineral commodity prices, dilapidated equipment, high inflation, and the insecurity at the time. KML has since been under care and maintenance.

For thirty years, the mine has been dormant. However, Government has made several attempts at revival. The Mines comprise a greenfield exploration area, a brownfield project comprising of a hard rock copper mine and processing plant, a hydropower plant known as Mubuku I, auxiliary mine facilities, cobalt-rich tailings, and associated minerals (collectively referred to as “Kilembe Mines”) operated by Kilembe Mines Limited.

In a statement released on Tuesday and signed by Ministers Ruth Nankabirwa of Energy and Evelyn Anite of investment and privatization, Kilembe Mines Limited is a Public Enterprise incorporated as a company with majority shares held by the Government of Uganda (99.99%) and minority shares held by the Administrators of the Estate of the late G.D.K. Rukidi Ill.

They noted in the statement, that both shareholders approve and consent to this process recognizing the importance of redeveloping the mines. The company is listed under the Public Enterprise Reform and Divestiture Act, Cap. 98 (PERD Act). It is under the mandate of the PERD Act that the Ministry of Finance, Planning and Economic Development is pleased to update the press and public on the steps that have ‘been taken.

In 2020, three devastating floods destroyed infrastructure at the mines including a tailings dam, Mobuku I hydropower plant, the industrial and domestic water system, the administration block, and workshops. We have deployed the UPDF Engineering Brigade to carry out restoration works and restore the mines to an attractive state. They are already on the ground.

The Administrators of the estate of the late Sir G.D.K.Rukidi III have been duly reinstated as shareholders in Kilembe Mines Limited. They are actively involved in this process and consent to the procuring of an investor.

The Mineral Wealth of Kilembe Mines has unmatched potential. It has known reserves and resources of copper in ore and tailings. It has potential for cobalt, copper, and associated base metals within the Mining Lease and Exploration Licence areas. It is a priority of the Government of Uganda provided in the Third National Development Plan (NDPIII) 2020/21-2021/25 Mineral Development Programme whose aim is to increase exploitation and value addition in selected resources for quality and gainful jobs in industrialisation. Key expected results include increasing the volume and value of copper, increasing investment in the exploration and processing of selected minerals, and creating more jobs in the mining sub-sector. The prioritized minerals for NDP III include Copper, and Kilembe in Kasese is listed as one of the identified priority locations.

Copper and Cobalt are critical minerals in making clean energy technologies for the current global transition to clean energy. The current price of copper is between USD 10,000 and 10,500 per tonne.

In December 2019, this price was about USD 9,000. Electrical networks need a large amount of copper, it is a cornerstone for all electricity-related technologies and electrical equipment (wiring, motors, switches, transformers, and telecommunications).

The redevelopment of Kilembe Mines will have a catalytic effect of facilitating industrialization, offering significant employment opportunities for Ugandans, and increasing revenue.

“To achieve this, we have invited companies to express their interest in partnering with Government through a Mineral Production Sharing Agreement (MPSA). A MPSA partner shall be selected through a transparent open international bidding process. The use of a MPSA is to ensure that Government and the people of Uganda benefit more from the value of the minerals extracted. The details of how production sharing shall be implemented are matters for the rest of the procurement and negotiation process,” the ministers said.

At the inaugural Cabinet meeting on 28th June 2021, His Excellency the President made Directives regarding the linkage between minerals and industry and directed Cabinet to get an investor to refine our copper for cables, transformers, and aluminium industries as well as military. This restoration of the mines to an attractive state, and the process of procuring an investor is a significant step to achieving this goal.

Continue Reading
You may also like...
Related Topics:Featured, Kilembe Mines