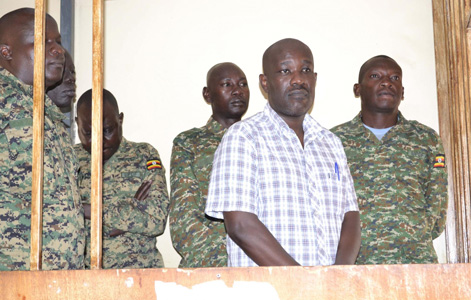 Former Bubulo West Member of Parliament Tonny Nsubuga Kipoi and five soldiers have been acquitted of offenses related to security by the General Court Martial in Makindye. They have been on trial since their arrest in 2018.

On Monday, a seven-member panel of the Court martial chaired by Lt General Andrew Gutti dismissed the charges against the group arguing that evidence made by five prosecution witnesses did not in any way connect or criminalize the prime suspect Kipoi and his co accused of the offenses against them.

According to the charges, Kipoi and his 5 buddies plotted to overthrow the government of Uganda by organizing meetings, mobilizing funds; acquisition of firearms and military training in the Eastern Democratic Republic of Congo and also by mobilizing and recruiting people into their rank and file.

Prosecution had alleged that the 6 men committed these crimes between 2011 and 2012 in diverse places in Uganda specifically in Kampala, Mpigi, Luwero Entebbe, Fort Portal, Mbale, Masaka and Nakasongola districts.

Lt General Gutti in his ruling, noted that out of these five witnesses, only one Prosecution witnesses Wandazi testified that one of the accused persons, Sargent Rogers Mweru had reported to him the actions of Kipoi but still the evidence was not sufficient enough to warrant the accused to defend themselves.

Court heard that the rest of the witnesses did not mention the roles played by Kipoi’s co accused at all.
Gutti relied on regulations 42 of the armed forces rules of procedure, and found that there was no establishment of a premafacie case and accordingly set the accused persons free citing that they did not have any case to answer.