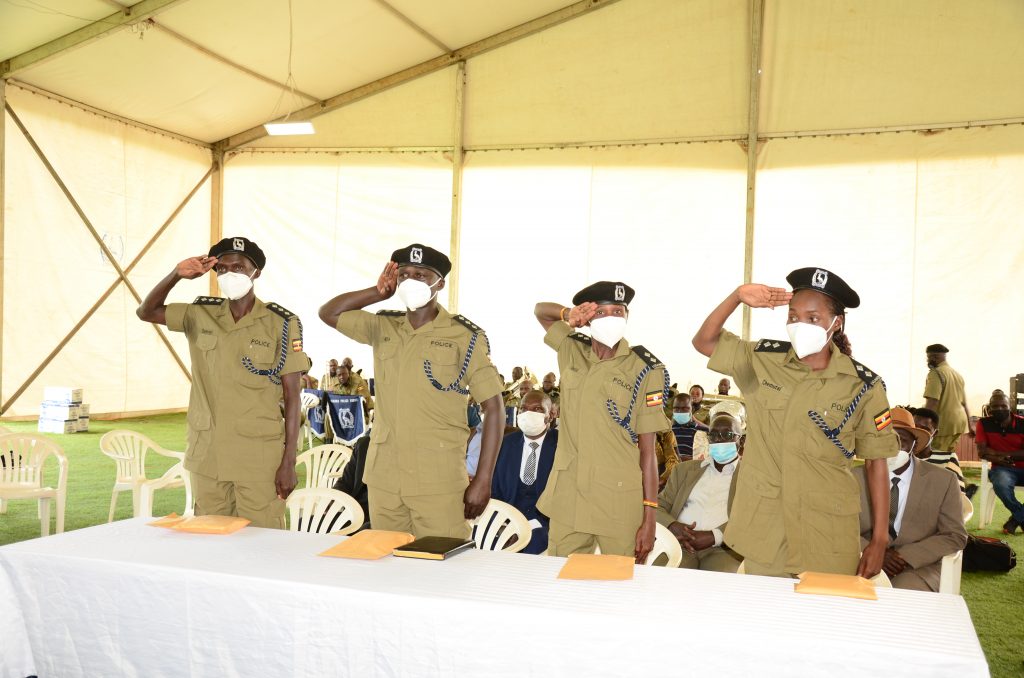 The Inspector-General of Police J.M. Okoth-Ochola, (Esq.) has applauded and promoted athletes from the police Force who won Gold medals at the Common Wealth Games in Tokyo 2020 Olympics.

The force celebrated the achievements of the Police athletes, for the historic win, success, pride, and jubilation they brought to the Uganda Police Force, Uganda, and the entire African continent during the Tokyo 2020 Olympic games.

“As UPF management, we decided to hold this function, first of all, to convey our gratitude to all the athletes that participated in the Tokyo 2020 Olympic games, for their resilience and determination displayed when representing our country. To those that did not excel, the Force still recognizes the outstanding achievement of participating in such a highly competitive event. You already scripted history by your participation and the pain you felt of not winning medals will be the motivation to win in the next event. I, therefore, implore you not to run away from the setbacks, but, run over them” said Ochola.

He then announced that at its last sitting, the Police Authority approved the promotion of IP Cheptegei Joshua and IP Njia Benjamin to Assistant Superintendent of Police after he forwarded their letter of Promotion to them.

“Similarly, in exercising the delegated powers from H.E. The President, I hereby promote the following subordinate officers, who participated in the Tokyo 2021 Olympics, to various ranks of Corporal to Inspector of Police;”

He noted that the games they participated in were not only about medals, but that such events are more to do with the love for the game and developing our society.

“We, therefore, implore you to use your talent and new ranks to inspire our youth by making them active and lure them from criminality. Secondly, we expect you to assist, advise and help our other local athletes to participate in future events, earn a living and also win medals. Games require teamwork because it takes all team members to give life to any sport. For any competitive game, it is usually not about who runs fastest, but it is the feeling of teamwork that you will always excel. I further encourage you to use the teamwork to strengthen the relationships in your lives.”

Ochola also acknowledged the efforts of the parents, spouses, and relatives of the athletes and all the other officials from the Uganda Athletes Federation, Uganda Olympics Committee, and Ministry of Education & Sports who managed and took care of some of the needs of the athletes.

“As UPF, we have already provided a double cabin Pick up and a minibus to these athletes to facilitate their movements during the training. The institution is also committed to providing more support in due course. Finally, I appeal to you to continue observing and enforcing the COVID-19 guidelines to curb the pandemic as we protect and Serve. With the above remarks, let me wish everyone good health, long life, happiness during this festive season, and success in the coming year.”