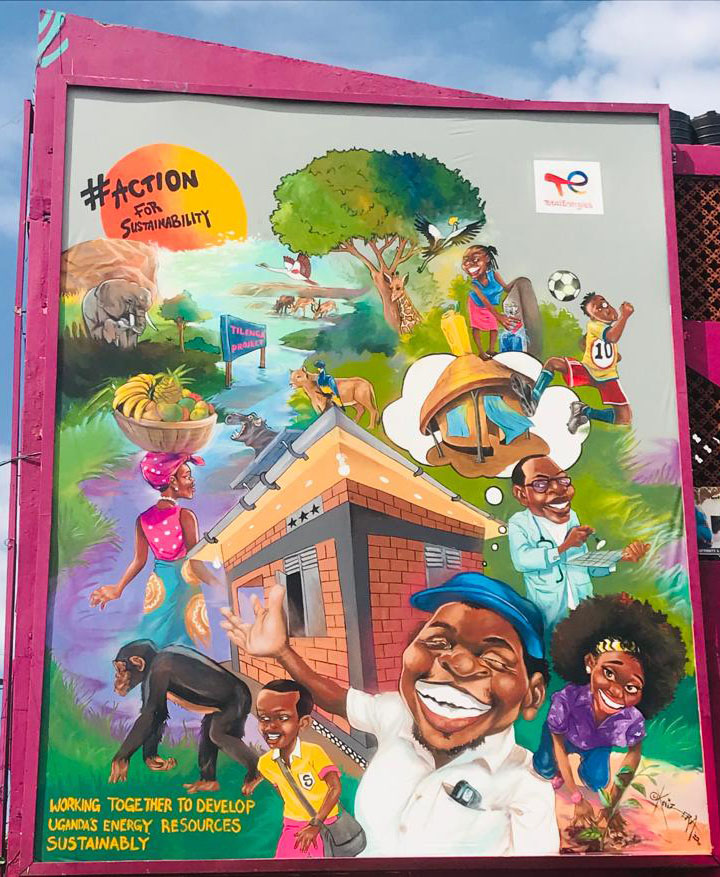 TotalEnergies answers the most frequently asked questions relating to Tilenga & EACOP projects in Uganda and Tanzania.

Why is TotalEnergies embarking on the Tilenga and EACOP projects when scientists from the Intergovernmental Panel on Climate Change, the International Energy Agency and the United Nations are calling for an immediate halt to all new fossil fuel initiatives?

During this transition phase, in which TotalEnergies is fully engaged, the world still needs oil and reasonably priced oil, now and for a few years to come. This is the very purpose of the project, which provides for oil production over 20 years. More than anything, the energy transition is about social acceptability.
Large-scale investments in renewable energies are required, as TotalEnergies is making while maintaining fossil fuel prices at reasonable levels to enable an energy transition that does not affect the most vulnerable groups of society and is accepted across the board.
To deny access to this energy to those most in need is to leave them in poverty.

French companies should not participate in operating new oil fields

Uganda is a sovereign state that made a strategic decision to exploit its natural resources. Whether with TotalEnergies or another company, Uganda will tap into its resources. To stop Uganda from exploiting its natural resources to develop as a country because we, as Europeans, have over-polluted or are over-polluting could be regarded as paternalistic, cynical, and selfish to the say least.
On top of this, while a gradual reduction in oil and gas production is necessary, a sudden halt to it is neither possible nor desirable, and the depletion of existing reserves will not suffice to make the transition to using renewables. Against this backdrop, TotalEnergies has developed an oil exploitation project with one of the company’s lowest CO2 emission levels, at 13 kg CO2 per barrel (company average of 18 kg CO2 per barrel factoring in scopes 1&2).
TotalEnergies does not intend to just produce Ugandan oil, which will be extracted in any case, but also to be a major player in renewable energy in Uganda and to meet the local population’s vital everyday needs through measures like electrification and access to water.

Will the Tilenga and EACOP projects cause irreversible damage to biodiversity?

Not! Together with local communities and spearheaded by independent institutions, TotalEnergies has committed to implementing action plans that deliver a positive net impact on biodiversity in the context of the Tilenga project.
We rigorously apply our Avoid – Reduce – Compensate action principle across the project, fully complying with International Finance Corporation (IFC) standards and the Equator Principles which represent the global benchmark. TotalEnergies has entrusted monitoring of compliance with standards to external and independent experts.
In addition, the pipeline route was designed to minimise its impact on the landscape and biodiversity and to avoid IUCN protected areas. Before its development, we conducted a study to determine the presence, location and extent of essential natural habitats to avoid, reduce and compensate any residual impacts.
TotalEnergies then went one step further with its decision to develop additional initiatives that promote biodiversity. These include the restoration of two thousand hectares of tropical forest and the preservation of 10 thousand hectares of natural forest to protect the habitat of chimpanzees; the restoration of wetlands in the Victoria Nile delta; and the development of a species reintroduction programme (black rhinoceros).

Will the installation of EACOP cause pollution in Lakes Victoria and Albert, the main sources of drinking water in East Africa?

EACOP will not cut across either of these two lakes which are vital water sources for the region. Water pollution risks caused by the EACOP pipeline were therefore taken into account.
The route of the pipeline, which has been built in line with the strictest international standards, was designed to minimise its environmental impact and avoid sensitive areas as much as possible. The entire pipeline will be built underground and re-vegetated upon completion. Equally, the pipeline does not cut across any IUCN-protected area or any Ramsar site.
Furthermore, TotalEnergies is deploying innovations to enhance pipeline safety and integrity. As such, prior and continuous monitoring during operations will be ensured, notably by using optical fibre installed along the pipeline to anticipate temperature changes and any intrusions.

Is it true that TotalEnergies’ EACOP project will force hundreds of thousands of inhabitants to move?

No. EACOP certainly does not involve moving hundreds of thousands of people.
A total of 723 households, or approximately 5,000 people, will be rehoused in the vicinity and better conditions, on acquired land of 5,600 hectares. The figure of 100,000 refers to all people who own an asset, i.e., farmland or animal grazing land, on the pipeline route, either because they are located on permanent rights-of-way or for the duration of the construction works. In the vast majority of cases, the owner of the land will be able to use it after the works. Moreover, all the stakeholders concerned are frequently consulted and updated on the project’s progress.
The Tilenga and EACOP projects will significantly improve living conditions locally, with 94% and 73% of compensation agreements signed for Tilenga and EACOP respectively in Uganda (September figures). These agreements are supplemented by measures to promote employment, education and respect for women’s rights. As with all other aspects of the project, TotalEnergies stringently complies with local regulations and international standards (IFC).

Not true. The pipeline will be underground and invisible, leaving no mark on the landscape.
It will also be re-vegetated upon completion and will not cross any IUCN protected areas. 80% of the pipeline’s footprint will be returned to its natural state. Since Uganda is a landlocked country, we need to transport the oil via a pipeline to a Tanzanian port. To achieve this, TotalEnergies is developing the next generation of modern and secure underground pipelines, equipped with leading-edge technology. The pipeline will not be visible. Here too, the reality is far removed from the images some have given.

Most of the Tilenga project wells will not be developed in Murchison Falls Park.
While current permits would have allowed drilling over an area representing 10% of the park’s surface, TotalEnergies has intentionally restricted development to less than 0.05% of the surface area (i.e. a footprint 200 times smaller). The wells will be limited to 10 locations and will be as compact as possible. They were designed to limit visual impact, particularly through the development of vegetated banks. In addition, TotalEnergies is investing alongside the authorities in an effort to better manage the park which is currently partly affected by poaching.

You capitalise on Africa’s resources

The main beneficiaries of this project are the local populations directly, through the economic, social and environmental benefits it will provide them.
With nearly $2 billion in investments, the Tilenga and EACOP projects will create nearly 80,000 direct and indirect jobs, representing 0.5% of the additional active population. The exploitation of these resources will considerably impact the development of the Ugandan and Tanzanian economies, where more than 20% of the population lives on less than $2 per day (€55 per month).
Furthermore, TotalEnergies is committed to an extensive and far-reaching training programme, delivering three million hours of training coupled with new potentially valuable skills for other industries in the future.
This is just the start as we look to extend our impact beyond the local level. A substantial portion of the profits from resource exploitation will be reinvested locally, particularly to promote energy access for village populations (electrification, access to water).
We arranged several public meetings, bringing together a total of more than 200,000 people as we kept them informed and involved throughout the roll-out of the project. Specific attention was paid to women’s rights, for example by ensuring that women attended the meetings and confirmed their agreement to the procedures to acquire land and pay compensation.
We could ask ourselves whether the desire to prevent countries like Uganda from exploiting their natural resources is not itself inspired by a vision that is neo-colonialist or selfish to say the least. What local Ugandans want to see is a developed country with infrastructure catering to people’s most basic needs.

You are preventing 100,000 people from farming their lands

This is not true.
The affected families continue to live on and farm their land until they receive full compensation, after which they will be relocated. Only at this stage will they be given three month’s notice to vacate the area. Aside from the multiple direct and indirect jobs created, TotalEnergies’ projects will open up economic opportunities for the local population.
In addition to the compensation policy, decided with governments and supported by the population, families are offered entry into the Livelihood restoration programme. They also receive additional compensation in the form of transitional food assistance for up to six months.

You support the Ugandan state, whereas it seriously threatens journalists and activists opposing the project

TotalEnergies has a history of engaging directly with all members of civil society, including NGOs involved in human rights issues. To this end, the Company’s commitments include quarterly meetings, stakeholder dialogue, bilateral meetings, webinars on keynote topics identified by NGOs and responses to questions and concerns raised by all project stakeholders.
TotalEnergies is fully aware of the challenges at stake with regard to freedom of the press and general information. On 28 May 2021, the Chairman and CEO of TotalEnergies SE wrote a letter to the President of the Republic of Uganda to share his concerns on the matter and to request that the rights of those affected be respected, stressing the importance TotalEnergies places on upholding freedom of the press and fostering open dialogue with its stakeholders.
TotalEnergies will not tolerate any threat or attack against those who peacefully defend and promote human rights.
(1) International Union for Conservation of Nature (IUCN) protected areas: Ia (Strict nature reserve); Ib (Wilderness area); II (National park); III (Natural monument or feature); IV (Habitat/species management area); V (Protected landscape or seascape); VI (Protected areas with sustainable use of natural resources).