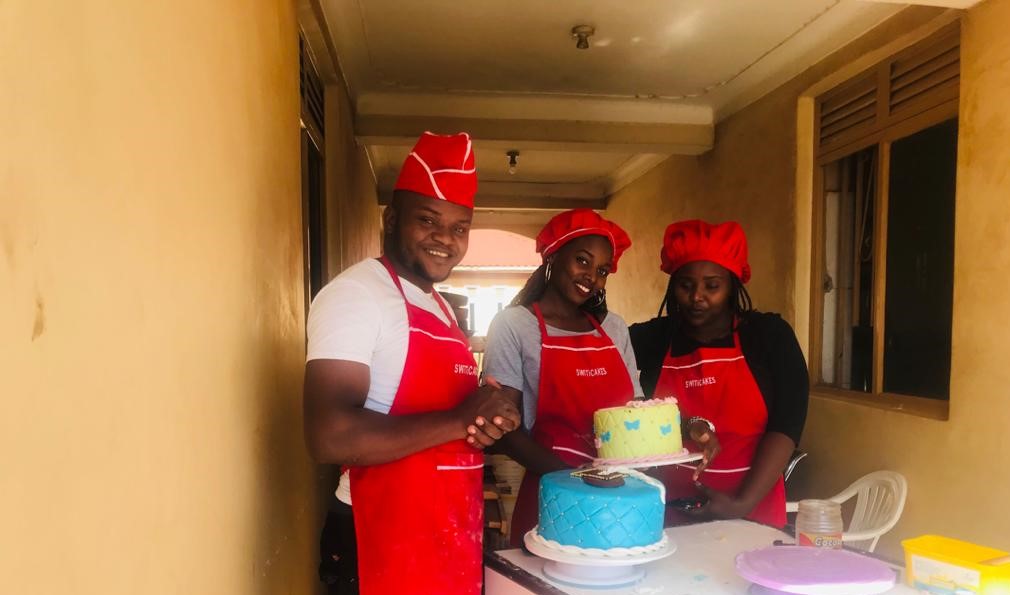 Ms. Abaho at the baking school with the instructor & the author

When the COVID-19 pandemic broke out, several donor countries and agencies put a pause to the funding they were sending to developing countries like Uganda, hindering the work of many Non-Governmental Organizations and other organizations that depended on it.

It was lack of funding that forced some of the NGOs to close offices and lay all workers off, while others down sized and were forced to let go of some of their staff, in order to cut operational costs. As a result, the number of unemployed people increased to a worrying number. As at 2019, the unemployment rate in Uganda stood at 2.5%.

Being laid off in the middle of a pandemic is one of the most unfortunate things many Ugandans had to deal with. From media houses laying off staff and closing Bureaus, to NGOs cutting the number of staff, many people are yet to recover from the depression they suffered due to loss of jobs.

As a result, many young people are depressed and some have committed suicide. Many of these, are young people and family heads who chose death as a way of running away from their problems.

Patience Abaho, is one of the many youths that lost their jobs at an NGO. According to Ms. Abaho, their bosses started warning of a possible lay off of some staff, when the pandemic broke out in some of the donor countries. They were all rallied to start finding other means of survival, as early as April 2020.

“They had been telling us that the funding was getting finished and asked us to save the little money we had. But they never told us we would lose our jobs by October.”

Despite the pandemic, she says they were asked to continue working. The NGO advocates for reduction of the spread of HIV/AIDS among youths especially young women in rural areas of Central Uganda. Abaho had worked with them for 3 years.

She says the organization provided them with PPEs to continue working during the COVID-19 lockdown. “We were provided with masks and sanitizers. Fortunately, none of us the staff ever tested positive. However, in areas where COVID-19 cases were registered, we closed down safe spaces and stopped working” she narrates.

Along the way, the organization lost funding due to COVID-19. They were getting funding from CDC, through another NGO, before getting to them. In October, the staff received the disturbing call of being laid off. She says it came as a surprise, because originally, they had expected just salary cuts, something they would have preferred.

“We were surprised that we were laid off when things had started to get back to normal.” By October, some sectors of the country had been re-opened and companies/organizations had returned to work. To the surprise of many, this is the time laying off of workers took place.

She has since tried to get a new job, in vain. She is not the only young lady who lost her job. In Uganda, more women lost their jobs due to COVID-19 than men. This has affected 76% household in Uganda which are headed by women.

For Abaho, finding a job remains a challenge and so does starting up her own business. I met her at the bakery where she is taking baking lessons and she seemed to have mastered the art of baking, she however says she has no money to buy materials to start her own baking company, as this needs formal registration and then buying the materials to use. She now hopes that hopefully, government will come up with a fund to help youths like her who are innovative but have no money to start up their own businesses.

The girls she helped during her time at the NGO still call to check on her, and report progress. Abaho says she is proud of the work she did at the Organization and hopes that someday when all this is over with, she will find another job. For now, baking helps her stay focused and fight off the depression, caused by idleness.

Most young women who worked in restaurants, bars, salons, shops lost their jobs due to closure of business, while others were forced to go to villages since they could not afford rent anymore. Some businesses like bars and night clubs which employ several young ladies have been under lock and key since March 2020 to date. This means that all employees in these areas, who are mostly women are still jobless and depressed.  https://blogs.worldbank.org/opendata/labor-market-impacts-covid-19-four-african-countries

The bigger challenge is the fact that there are more unemployed women (11%) than men (8 %) in Uganda, yet even the few who are employed are losing their jobs. For instance, women are concentrated in client-facing roles while men concentrate in logistics or security. Women are also over represented in the leisure, travel and hospitality business. On the other hand, male dominated sectors such as construction and manufacturing were allowed to continue after a short period of cessation during the lock down. Thus, during the time of the covid-19 containment when only essential staff and jobs have to be retained, it is most likely for men than women to retain their employment. Additionally, travel restrictions associated with the outbreak may keep women from reaching or leaving their jobs, thereby affecting their performance and job security. The result of all these is more loss of jobs and therefore dwindling incomes and growing poverty for women in the formal sector, a growing feminization of poverty due to covid-19. https://www.akinamamawaafrika.org/wp-content/uploads/2020/10/Gendered-dimensions-of-the-economic-impacts-of-covid19.pdf