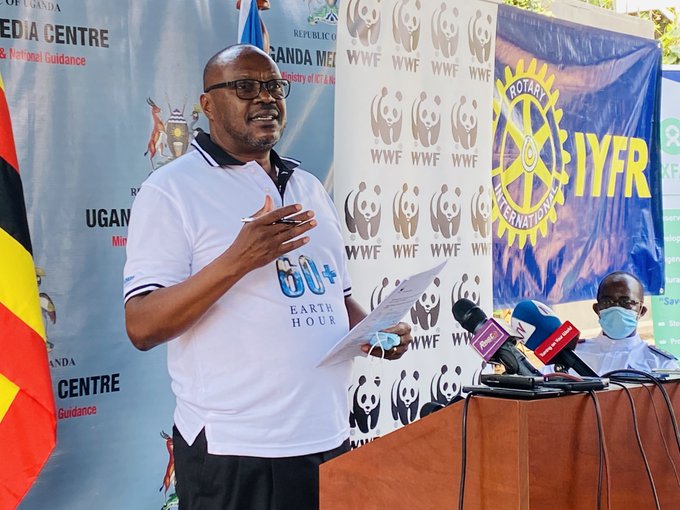 Plastic waste is choking our Country – polluting the air, water, and soil that both people and wildlife need to survive.

Wild wide Fund for Nature Together with Government Ministries, Agencies, CSOs and other social formations like the Rotarians, Scouts, Go Green Youth Networks have called for a total Ban on single use plastics.

The call comes as a commemoration of the Earth Hour 2021. The partners argue that the Plastic waste is choking the Country – polluting the air, water, and soil that both people and wildlife need to survive.

“Water bodies world over contain 300 million tons of plastic and we add another 8 million every year – that’s a truck load of plastic a minute! Breaking down into micro plastics, these are entering our food chains. The average person may be ingesting as many as 2,000 micro plastic particles every week” their joint press release says.

The development was communicated at Uganda Media Centre in Kampala during a joint press conference addressed by the Minister of Water and Environment Hon. Sam Cheptoris, the Patron for Uganda Scouts Association Gen. Katumba Wamala and Country Director of World-Wide Fund for Nature Mr. David Duri as well as officials from the Church of Uganda and Buganda Kingdom.

While addressing the media, Hon. Cheptoris said that from the fresh air we breathe to the clean water we drink, nature provides the essentials we all rely on for our survival and well-being and that the loss of nature threatens these essentials.

“At the current rate of nature loss, we stand to face the extinction of an estimated 1 million species within decades and significant declines of food and water supply and many other services that nature provides to us every day, for free. This is supported by WWF Living Planet Report 2020, which has found population sizes of wildlife decreased by 68% on average globally since 1970” Cheptoris said.

He added that as the NRM Government gears up for the next five years, this is going provides a momentous opportunity for further prioritization of environmental and the sustainable development agenda at the forefront of all Government programs.

The team today flagged off the 2021 Earth Hour campaign, delivering a message more pertinent than ever – raising awareness of the nature

loss crisis and climate change, and addressing how every one of us must play our part in protecting our one shared home, which means, in turn, protecting ourselves.

“This year, we want to shine a light on the deep connections between climate change and nature loss – that we can’t beat climate change without protecting nature nor re-establish a thriving natural world without a stable climate. Under our theme, keep it Green and clean, we want to mobilize Ugandans address the rapid deforestation by Planting Trees, Adopt the use of Renewable energy technologies and take a firm stand on plastic pollution in the country. Plastic pollution particularly in today’s Uganda has become one of the most alarming environmental issues” WWF Country Director Mr. David Duri said.

Gen. Katumba Wamala noted that while it is important to support development, environmental conservation should also be considered.