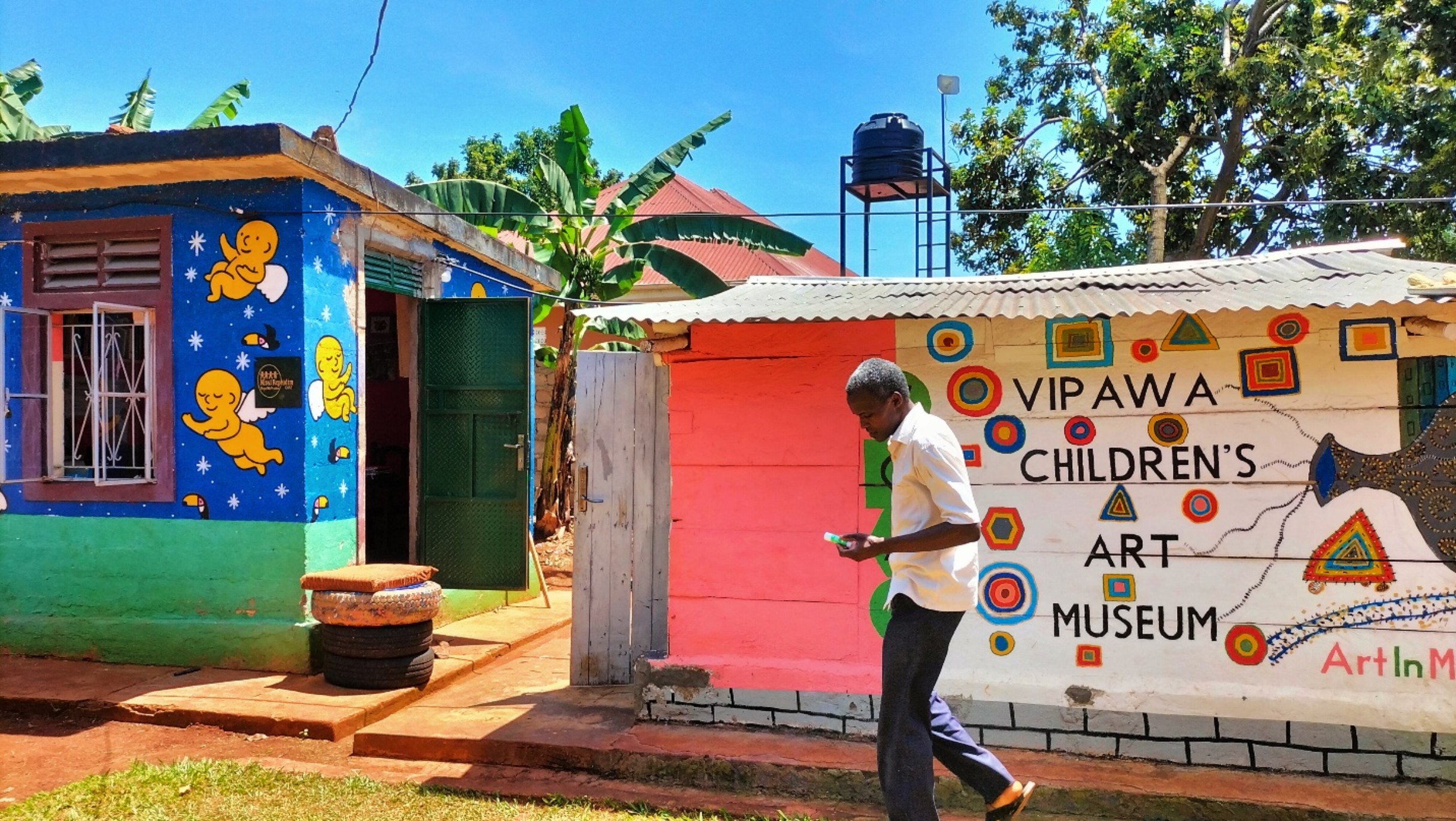 “We are all government”- A panellist at the 2022 Azulato Art Forum by Goethe-Zentrum Kampala.

Sharon Namulindwa and Daniel Atwenda take the mantra of ‘we are all government’ to heart. They utilize their creativity to impact and inspire children to grow their artistic abilities through Vipawa Children’s Art Museum. As a pioneer children’s art museum in Uganda, operated by Nissi Rephidem Care, Vipawa is a place dedicated to the growth and celebration of children’s creativity through art education and exhibitions.

“This is what we want to do for our community. The intention of Vipawa is so parents appreciate what their children are doing.  Someone once told me ‘Ministry is not numbers; ministry is reaching out’. Even that one individual child matters,” says Daniel Atwenda, a 37-year-old male artist and curator of children’s art at Vipawa Children’s Art Museum.

In inception, the museum started in 2015. The idea was to have something that curates and exhibits the work children create over the years for sale. According to Daniel, starting a museum though is no easy task; it requires a lot of creativity and research.

“In starting Vipawa, I wrote to every Children’s Art Museum google could bring me. I also reached out to the Uganda Museum head curator, Nelson Abiti, in conversational research. As a librarian, I knew I needed to do my research before setting up.” In 2017, Vipawa set up physical premises in Jinja within a structure that had been used for poultry rearing.

In 2009, Sharon Namulindwa was a primary student set to join secondary school. She however had taken a preference for art: where her fellow students could theoretically explain an insect in science, she could visually depict the same insect. On finishing Primary school, Sharon chose to join vocational training in the Directorate of Industrial Training, later joining Nagenda International Academy of Art and Design (NIAAD) in 2014 for further art specialization. “People looked at me as a failure for choosing to pursue art,” Sharon, a 29-year-old visual artist and art trainer.

In 2014, Daniel Atwenda took on a job as a librarian at the same school, NIAAD. At the time, Daniel was also running community engagement programs in Wandegeya through Nissi Rephidim Care, a Christian Registered NGO he founded in 2012. After joining NIAAD, following interactions with teachers and students, Daniel produced his first art piece in 2016. One of these students was Sharon. Daniel and Sharon Atwenda, now married with two children of their own, live in Jinja and run the Vipawa Children’s Art Museum together.

In 2017, the couple set out to start the Vipawa Children’s Art Museum showcasing children’s art. As of October 2022, the work exhibited at the museum showcases work curated in Nkaseta Village, Bbambula Parish, Mityana District, in 2019; before COVID-19 presented different realities.

In 2020, when the pandemic hit, the couple was forced to pause community engagements. With schools closed indefinitely and Daniel earning no salary for months, the couple had to prioritize survival for their family. However, the couple didn’t abandon the museum work. During the 2020 Covid-19 lockdown, the couple remodelled their poultry shack, using recycled tiles and bottles filled with sand. The remodelled space now includes an exhibition space, a learning space and a storage room

“I would walk to Bugemba to dig and earn some money as well as have food for the family. On my journey, I used to see a YY Coach with the words ‘Follow your heart’. When they released the schools from lockdown, I thought of returning to library work but it didn’t feel right. In December 2021, I wrote my resignation letter.” Daniel

In May 2022, Daniel reached out to Jinja City’s Education Department. In a letter to all Headteachers of Primary Schools in Jinja by Education Officer Mutesi Aminah, the Museum received permission to engage schools in running Art Classes within the schools. “We target children between  5 to 15 years. This year, in February and March, I visited 25 primary schools around Jinja to introduce the Museum-Schools Program but most couldn’t take it on because of the money required to buy the materials used to practically engage students.” Daniel

In October 2022, the couple decided to engage churches and local leaders such as the area Local Council II (LCII) chairperson, Mr. Naluwairo David, in a bid to influence parents to allow their children to take art classes on Sunday afternoons.

According to Daniel, while most schools teach art, they rely on a curriculum that does not represent the environment most times. “We went to Mityana and an 8-year-old drew their father in a drunken state. Every child’s art represents their environment. A curriculum of examination where one answer fits all is limiting. The beauty of a museum is they operate as a separate space of education and growth outside the education system,” Daniel.

According to the Association of Children’s Museums, there are more than 300 children’s museums in the world which act as community resources that advocate for children. “It would be wonderful if we could have a Children’s Museum in every district. The challenge with my home community and why it is taking long to integrate the Museum is we settled in a time COVID-19 was paralyzing our societies. But even then, the secret of getting ahead is getting started,” Daniel.

The Museum motto ‘Art in Motion’ is an encouragement to follow one’s heart as creativity encourages our growth, especially the growth of children. “Through training and skill, Art can keep an artist in motion”.

Hope for a brighter future.

The difficulty in finding supporters has not deterred Daniel and Sharon. According to Daniel, the motto for the museum “Art in motion” came out of the sentiment that “Art is growth”. Through training and skill, Art can keep an artist in motion.

For Daniel and Sharon, the task is simple: making sure children have a bold and indelible existence within the lives they lead and the communities they grow up in.

Ugandan societies can no longer treat children like passive attendants in society. Children learn what society exposes them to and they take it as truth. What truths are we spreading in the communities and what responsibility are we all taking for the comprehensive development of children?