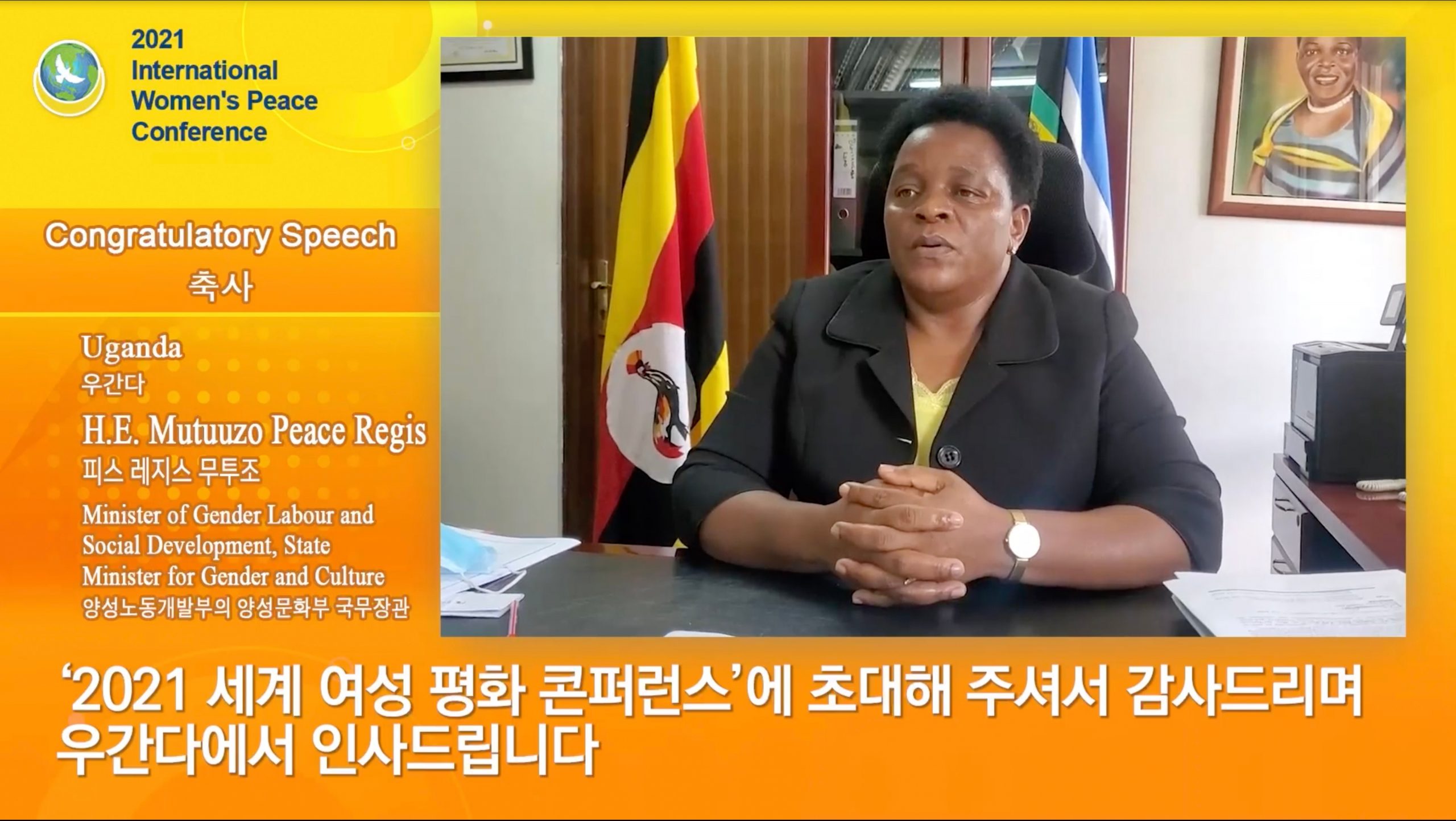 Over 800 female leaders attended the “2021 International Women’s Peace Conference”, hosted by the International Women’s Peace Group (IWPG, Chairwoman Hyun Sook Yoon) over the weekend. The conference was celebrated as the 7th Commemoration of the September 18th World Peace Conference and pledged to continue spreading the message of peace through the slogan WE ARE ONE.

The conference which was held online in South Korea on the 19th under the theme of “The Role of 3.9 billion Women for Sustainable Peace and the Improvement of the Status of Women” attracted participants from all over the world. About 800 female leaders both domestic and abroad attended this event.

Some of the notable women who attended the event include; Hon. Peace Regis Mutuuzo Uganda’s State Minister for Gender and Culture, Hyang Ran Lee (President of the Unification Oriented Council of the Republic of Korea), Evelyn Letooani (former High Commissioner of Lesotho to South Africa), Agatha Susila Anthony Dias (Founder and Director of Amcha Ghar, India) and H.E. Nasseneba Toure (Minister of Women, Family, and Children of Côte d’Ivoire) who participated to share practical experiences and various ideas.

IWPG emphasized the intrinsic value of the role of 3.9 billion women in peace activities and the importance of spreading a culture of peace to end conflicts, terrorism, and wars occurring in various parts of the world in the new normal era after the COVID-19 pandemic. To realize world peace, the 3.9 billion women and IWPG must lay the groundwork for spreading a culture of peace.

The event also emphasized the spreading of women’s peace movements based on the women’s network including urging support for the DPCW to be established as international law to cease the war.

In her greetings, Chairwoman Hyun Sook Yoon said, “IWPG has become the wing of peace and has been running with HWPL for the realization of world peace. We are still doing our best by converting all our activities to non-face-to-face online activities and communicating with IWPG members around the world for sustainable peace. The 3.9 billion women and IWPG will accomplish the realization of world peace together with HWPL under one heart and one mind.”

At the event, Uganda’s Peace Regis Mutuuzo, Directorate of Gender and Community Development in the Ministry of Gender Labour and Social said in a congratulatory speech that “we must feel the global role of 3.9 billion women in sustainable peace and the advancement of women’s status.”

She added that in Uganda, issues of peace, and more so peace for women and children have been a priority for the government. “It is evident in the commitments we have made and implemented in various International and Regional frameworks on the women peace and security agenda that the Government of Uganda is a party to” Hon Mutuuzo said.

She further noted that on the international level, Uganda is implementing the 3rd National Action Plan 221-2025 on women’s peace and security.

Hyang Ran Lee, President of the Unification Oriented Council of the Republic of Korea, expressed her support and said, “The people attending this event are the independence forces of peace, and they are like light, rain, and air, which give life to mankind. They do not give in to the pandemic and work to end the global war.”

At the conference that day, the first speaker, Evelyn Letooani, former High Commissioner of Lesotho to South Africa, spoke on the theme of “the necessity and value of sustainable peace activities in line with the current situation (the new normal era).” “Peace starts with me and affects my family, my neighbors, my society, and my country. This peace can be transmitted to neighboring countries and the entire world,” she said and added, “the 3.9 billion women around the world must unite and work with the IWPG for world peace and humanity.”

The second speaker was Agatha Susila Anthony Dias, Founder and Director of Amcha Ghar, India, spoke on “The Network of 3.9 Billion Women” and H.E. Nasseneba Toure, Minister of Women, Family, and Children of Côte d’Ivoire spoke on “the active role of women for the improvement of women’s status”.

Agatha Susila Anthony Dias said, “Being an IWPG peace lecturer is an honor that will be preserved for generations to come. We encourage 3.9 billion women to join the Peace Lecturer Training Education (PLTE) to become those who can sow this seed of peace to young children. Through this, in a few years, we will experience the world of peace that the DPCW will achieve.”

H.E. Nasseneba Toure said, “The quote ‘Peace’ is not a word but an action. It is engraved in the memory of all generations of Côte d’Ivoire. We will have to listen to the voices which call us and challenge us. I salute the IWPG for providing a platform to witness the action of a dedicated women’s organization.”

At the event, following the speeches on the topic, the IWPG Publicity Ambassador inauguration ceremony was held. Dr. Maha Alsakban, the Founder and Director of the Women’s Human Rights Center in Iraq; Professor Han Yeon-ju of Heilongjiang Province National Academy of China and Erlinda Olivia Tiu, National Secretary of the National Federation of Women’s Club of the Philippines, were appointed as Publicity Ambassador.