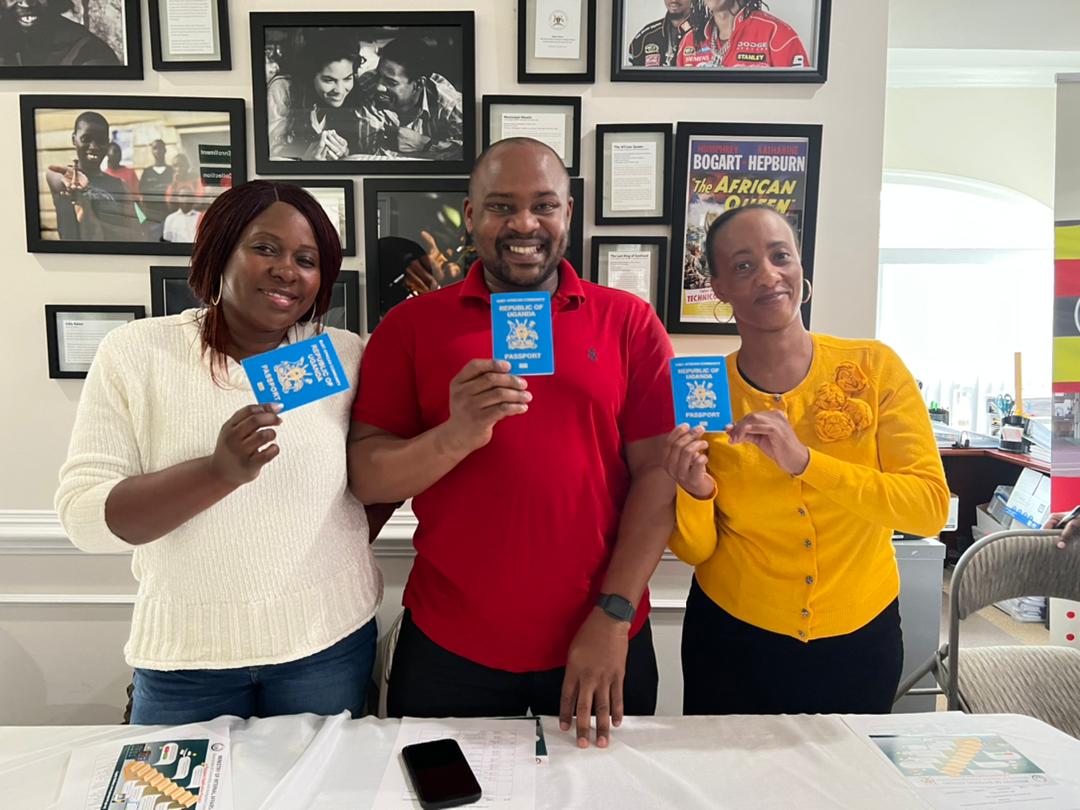 The Directorate of Immigration and Citizenship Control has officially launched the E-Passport Enrolment Center at the Uganda Embassy in Washington, DC.

The launch took place on Wednesday, March 30th 2022. The new EAC e-passport is a fully digitized document incorporating biometric security, making it fully compliant with international best practices, and therefore accepted at border controls all over the world.

During the 17th ordinary Summit of the East African Community Heads of State Summit in Arusha on 2nd March 2016, the EAC Heads of State launched the new international East African Community E-passport and directed that commencement of its issuance takes effect from 1st January 2017; and implement the phase-out program for the current East African and National passports from 1st January 2017 to 31st December 2018. Following the outbreak of the Coronavirus pandemic, the deadline was extended to January 1st 2021 with the latest deadline being April 4th 2022.

According to the Director for Citizenship and Immigration Control, Major General Apollo Kasiita-Gowa, the Washington, DC Passport Issuance Center suspended the in-person enrollment and production of Machine-Readable Passports (MRPs) in 2018 and has since operated a mail-in paper-based system, receiving submissions of application forms by mail for onward transmission to Kampala and collections of new passports from Kampala.  Under the new system, applicants for the E-passports will be required to appear in person at the Embassy and have their facial and fingerprints taken.

Speaking at the ceremony on Wednesday Major General Kasiita-Gowa expressed pleasure about the progress of the E-Passport roll-out, noting that the new process would see passport renewal wait times drastically reduced from several months to a matter of 14 days.

He informed Ugandans that it was important that they renew their passports as soon as possible and advised those who are not able to meet the April 4th deadline, that they would only be able to use their passports on one-way trips to Uganda.

Ms Julia Ikiso the Passport Control Officer and Project Manager said that the new enrollment system would require applicants to appear in person for biometric enrollment, but that the new system would have the benefit of access to the same network as the Passport Office in Kampala with 95% of the processes taking place in real-time, and printing is done within a week of receiving the applications on the system.

The event was marked by the handover of new passports for the first 3 Ugandan applicants, who received their passports less than a week from the date of their enrollment. She added that the roll-out had revealed the unique circumstances of various diaspora groups, ranging from time-zone challenges to physical accessibility and other immigration handicaps.

She revealed that the Passport Office would be rolling out a 24-hour client call Center helpline to ease the congestion experienced in calling the Embassies.

Head of Mission, Amb. Mull Katende, who received the equipment, thanked the DCIC for selecting Washington, DC as an enrollment centre. He said that the diaspora community remits over 1.3bn dollars a year to Uganda and it behoves the Government to be responsive to their calls to bring services closer to them and to improve service delivery.

Referencing his own area of accreditation which spans 11 countries in addition to the United States, Ambassador Katende called for innovative solutions for Ugandans living in areas of accreditation outside the borders of the United States, who would have challenges accessing the Embassy in person. “Ugandans need to know that their government cares about them,” he said.

The Washington, DC Passport Center is the second of 7 planned Embassy roll-outs, under the Uganda Security Printing Company a Consortium of German Firm Veridos GmbH and the state-owned Uganda Printing and Publishing Corporation (UPPC). The other Embassies which are designated Passport Enrollment Centers include Uganda’s Missions in London, Ottawa, Pretoria Copenhagen, Abu Dhabi and Beijing.

The event was co-presided over by Uganda’s Ambassador to the United States, H.E Mull Sebujja Katende and Maj. Gen. Apollo Kasiita-Gowa, Director Citizenship and Immigration Control (DCIC) accompanied by Brig. Gen. Johnson Namanya Abaho, Commissioner for Citizenship and Passport Control the Chairperson of the Uganda Security Printing Company, Prof. Muhammad Ngoma (USPC), members of the Ugandan Community and staff of the Embassy.

Continue Reading
You may also like...
Related Topics:Featured, Passports