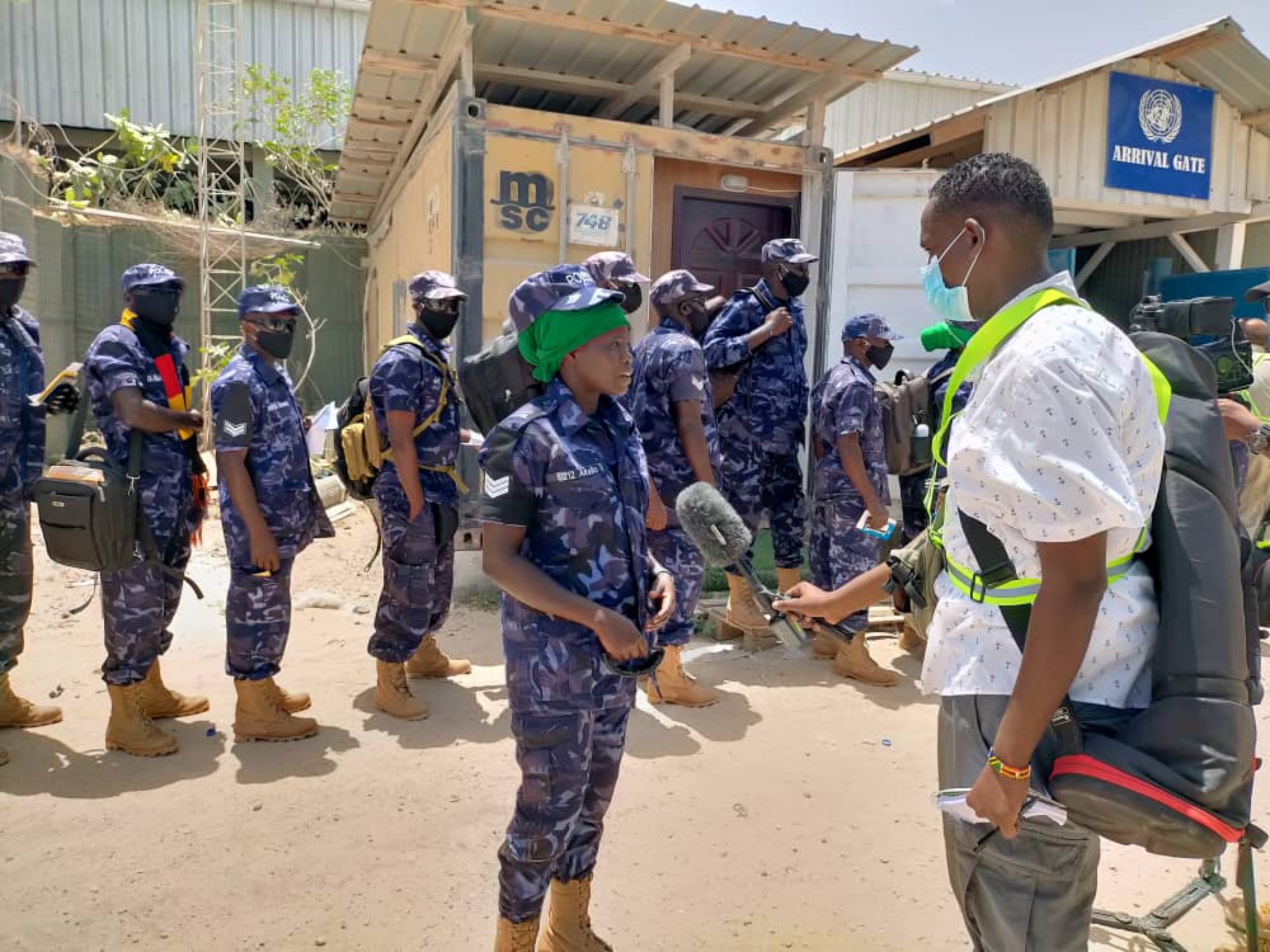 The Uganda Police Force has deployed ​the main body of ​a new contingent of officers to serve under the African Union Mission in Somalia (AMISOM).

The newly deployed​ 145​ personnel, from the Formed Police Unit (FPU), arrived ​on Tuesday morning​ and will be under the command​​ of​ ​Superintendent of Police (SP) ​Esau Opio Atorom​.

The Contingent replaces another one (UFPU-9) that has completed ​its ​one-year tour of duty. Uganda is one of the Police Contributing Countries under AMISOM, deploying Individual Police Officers (IPOs) and Formed Police personnel. Other Police Contributing countries are ​Ghana​, ​​Kenya, Nigeria, Sierra Leone, and ​Zambia​.

There was a command handover ceremony on ​February 20, 2022, ​at ​Aljazeera 2 Camp​, ​Graced by the AMISOM Police Commissioner and the Honorable Senior Police Leadership (PSLT) ​as witnessed by ​Senior Uganda Police ​Officer​ serving under AMISOM​ ACP Agapitus Ecotu​.

​Maj. Dr Ahmed Eid, the ​FMO-Public Health Officer for AMISOM, challenged the newly deployed Ugandan officers and men to play their role and contribute to the fulfillment of the AMISOM​ Mandate​ in Somalia​ as they observe the strict measure against Covid-19 whether it’s said that there’s no contagion. He urged the personnel to follow the guidelines by always washing hands with water and soap, sanitizing, and also minimizing being in social gatherings so as to live in a healthy environment.

“Somalia is​ in its full gears conducting Elections​​ and they need a lot of support in terms of improving policing in the country​, securing the vital installations, and protection of all delegates and their ballots​. The ​team that has been here played their big role and now the ball is left in the hands of you who have come in to fill the gap as we expect a great output from the fresh warriors​,” ​said Operations Commander ASP Bashir.

​Senior ​Superintendent of Police (S​S​P), ​Sylvester Kabaso​, the ​Team Leader Inspection and Control​ Unit​ Officer​, noted that he was ​opportune​ by the progress made by​ the Logistics Officers​ who ​were able to ​secure the venue under which they could brief the personnel before moving to the Transit Camp where they will undergo a mandatory quarantine period of fourteen (14) days.

“As ​we have arrived in the Mission area​, there is still more to be done in Somalia, we cannot relax on issues of security. This is because every day the situation keeps on changing​ and less predictable​. As a result, security has to be intensified each day​ on areas you will be deployed as we shall understand the environment after Induction Training​,” said ​SP Agaisa .

AMISOM Police has a Mandate of providing operational support to the Somali Police Force (SPF), to​​ help it perform policing functions effectively as per international policing standards.

The FPUs perform various duties, among them, community policing, counter-terror operations, public order management, explosives disposal, and cordon and search operations. All the functions are aimed at securing Somalia and making it a stable nation​. ​AMISOM has been at the forefront in strengthening the SPF to enable it to restore law and order in towns and other liberated areas.