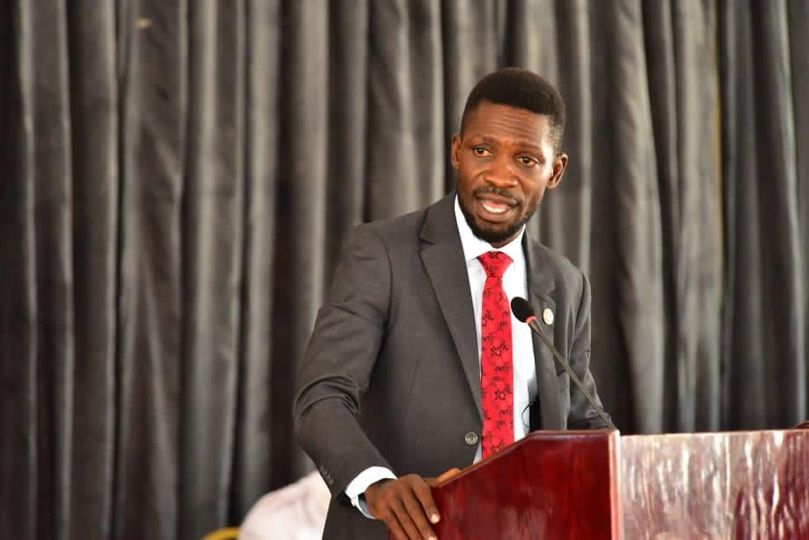 On Thursday, Kyagulanyi was given a chance to address Parliament and claimed that many of his supporters have been unjustly arrested, detained & tortured over several weeks.

First of all, let me take this opportunity to convey my condolences to you for the loss of your daughter and commend you for being strong in this very difficult time.

I am addressing this Parliament for the first time since the elections of 14th January which were marred with massive rigging.

The campaigns were filled with unprecedented levels of violence and brutality where very many of our supporters were murdered while others sustained grave injuries.

But despite all the irregularities and violence, I am convinced that I won the election decisively and I disagree with the results that were announced. I am sure many Ugandans agree that what we had was the most rigged election in our country’s history!

Madam Speaker, I decided to petition the Supreme Court, but because of the clear bias that was manifested from the on set, I decided to withdraw the Petition from the supreme court and take these matters back to the people of Uganda.

Madam Speaker, I have given this background to speak to the danger which we face as a nation.

Government institutions have been reduced to serving the interests of an individual instead of serving the people. This Parliament therefore has an opportunity to redeem its image and show that it can stand with the people.

Madam Speaker, as we comfortably sit here in this August House, Ugandans are being abducted on a daily basis by security operatives in notorious vehicles called ‘drones’.

They are being held in unknown detention centers, military barracks and various torture chambers accross the country. Just yesterday Madam Speaker, two young supporters of ours, a 24 year old Nhetto who is our cameraman, and the NUP youth chairman for Mosque zone in Kibuli, a one Busonga Najib, were brutally abducted by heavily armed men in plain clothes. The abductions were captured on camera.

Those who have been lucky to return have spoken of being subjected to unspeakable torture and brutality while in detention! Some of our people have been castrated, others have had their eyes and finger nails plucked out, their limbs broken and they have been subjected to advanced forms of torture like water boarding and electrocution.

Madam Speaker, several women have told us they were women have been raped in detention!

Many of our other supporters, such as Rogers Ssemakula of Mukono district have showed up dead- murdered by the state! Only yesterday, a young man Luuka Fabian who was kidnapped from Arua badly tortured and dumped in Nakawa passed on and he will be buried tomorrow in Arua!

We wonder if we still have a Constitution in this country. What happened to the requirement to have arrested persons presented before courts of law within 48 hours?

What happened to the prohibition against torture, which is a non-derogable right? Why are civilians being tried by military courts? Why are they charged in the absence of their lawyers and relatives, Madam Speaker?

Today marks 71 days since my entire campaign team was arrested and imprisoned in Kitalya on bogus charges and they are being tried by a military court. After being granted bail by a civilian court, they were immediately re-arrested by the military! Why are civilian political prisoners tried in military courts?

Madam Speaker, President Museveni has come out and acknowledged that it is on his orders that these, our supporters have gone missing. I want to imagine that all of us, regardless of which political party we belong to, understand that our Constitution provides for the presumption of innocence and the right to a fair trial. Isn’t it then unfortunate that President Museveni has convicted iur people for terrorism and treason like he has been saying and sentenced them to torture and long periods of detention without trial? Should we sit here comfortably while this continues?

Madam Speaker, last week, the Deputy President of NUP for Central Region, Hon. Mathias Mpuuga laid before this House a list of 423 NUP supporters who were abducted and are still missing. Today they are many more.

I once again request this Parliament to order for the immediate release of the abducted people and all the political prisoners. Ugandans are demanding that security agencies #ReturnOurPeople dead or alive and stop trying civilians in militarily courts.

I know that they may ignore any resolution made by this Parliament just like they have done before. But let this Parliament be on record and assure the mothers, fathers, wives, daughters, and sons of this nation that it cares about their loved ones.

Secondly Madam Speaker, we are demanding for an audit into the election of January 2021.

Honorable members, it is in the interest of this Parliament to take lessons from our own history. This country has been in a similar situation before.

In the 1980s, an election was rigged using security forces. President Museveni castigated the courts at the time for being used by President Obote to give his regime a semblance of legitimacy. Ugandans were disappearing and being kidnapped in what was called panda gari.

Even peaceful demonstrations that are within the law have been criminalised and citizens are being treated like armed rebels.

This Parliament, under you Madam Speaker, can rise to the occasion and distinguish itself by doing the right thing. This Parliament has an opportunity to stand on the right side of history.

But if it does not, the people of Uganda will invoke Article 3 of the Constitution and take these matters upon themselves, and seek to restore constitutional rule.