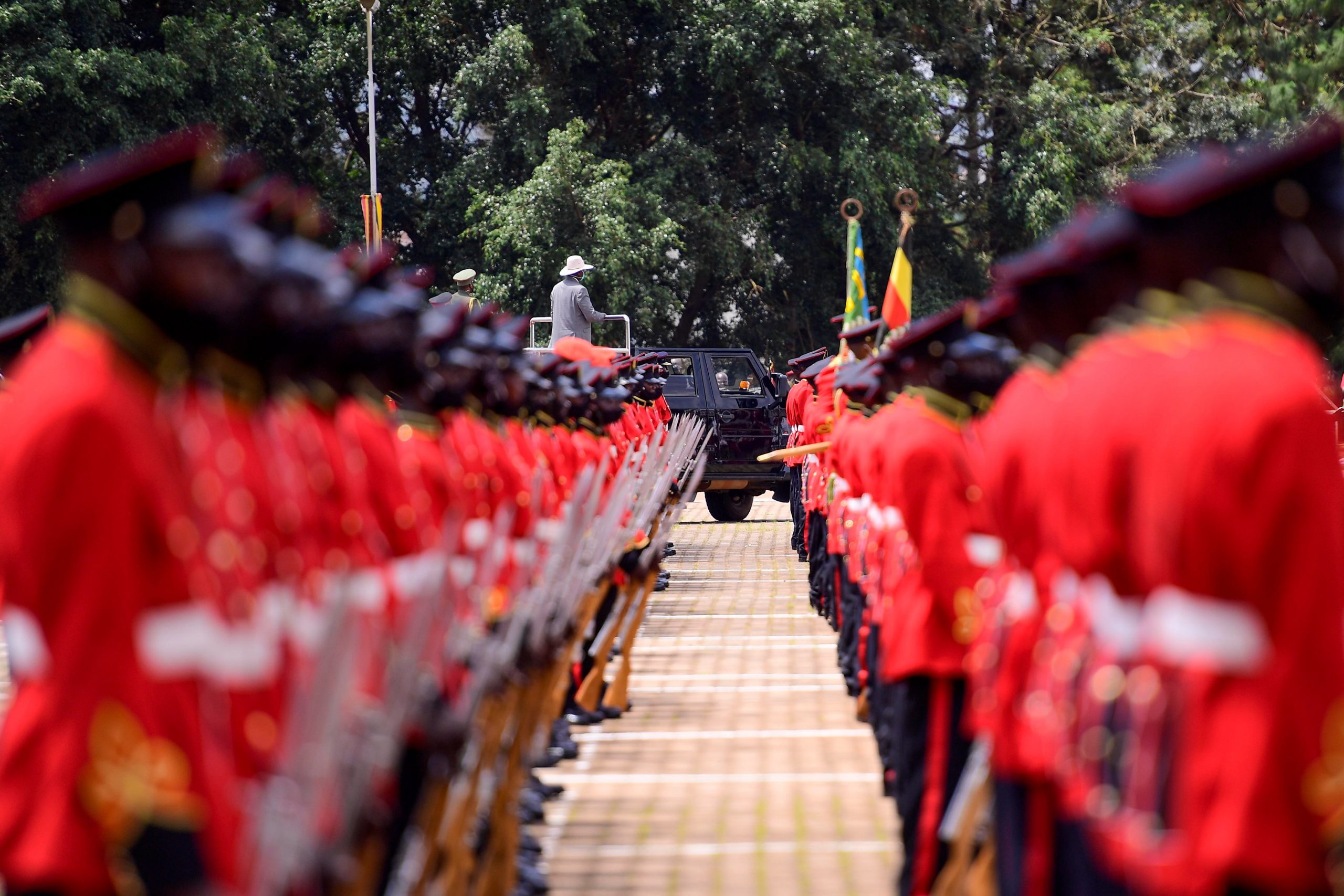 Today, the 9th of October, 2021, is the 59th Independence day anniversary of Uganda. In these past two years -2020 and 2021- the new Uganda, has shown that it can stand on its feet and defeat any challenge.

In these two years, as many of you know, we dealt successfully with problems of Locusts’ invasion; the rising levels of the waters of the Lakes (the floods); the land–slides; the floating island that were threatening hydro dams; and the corona pandemic ─ where we minimized the deaths, recording a total of 3,150 deaths (as of 5th October 2021), hitherto, in spite of the onslaught of the terrible disease, for now, one year and seven months.

All those challenges notwithstanding and in spite of the indiscipline of some actors, we successfully held the 2021 General Elections for President, Parliament and Local Governments, on time. Additionally, even our economy managed some growth in both the financial years 2020-2021 and the present financial year of 2021-2022.

However, we could have achieved more if it was not for the parasites that want to harvest where they have not sown (bamulya-byengedde). When you reflect deeply on the history of this part of the World, you notice the phenomenon of the two actors: the producers of wealth (goods and services) and the parasites – those who want to eat and even prosper, without working. Between 800 AD and 1400 AD, what is now Uganda and the surrounding areas of Africa, experienced stability and progress under the dynasty of the Bachweezi. That is why the Wanainchi transformed the known Bachweezi into Lubaales (small gods). These are: Mukasa (Mugasha), Wamala, Mugyenyi, Ndahura, Kagoro, Isimbwa, Kyomya etc.

On account of some unclear reasons, this empire collapsed around 1400 AD and the smaller kingdoms that we know, succeeded this united political unit and came with the endless wars (entaro), raids for cattle (Kunyaga) etc., fomented by these small kingdoms and their myopic managers; the wealth creators were disturbed by these activities.

God always mercifully helps Africa. Having lost the hieroglyphic writing of ancient Egypt, our ancestors in the Great Lakes, depended on oral history. However, some natural phenomena help us to date events that would, otherwise, have been difficult to determine. Such a phenomenon, by divine command, was the eclipse of the sun (Obwiira – Kabiri) that occurred on the 17th of April, 1520 AD at Biharwe, Mile 9 from Mbarara, on Masaka road. When the eclipse occurred, the Munyoro King, Olimi, Rwiitamahaanga, as well as his Army, fled in terror and abandoned the large herds of cattle he had raided from Rwanda. The Banyankore took these cattle and are known as: “Empeenda ya munoni” (whose translation is not clear to me) or Enduga haiguru

(easier to translate because it means – gift of heaven).

The ruler of Ankole that time was Nyabugaro, who was No.4 in the post – Bachweezi dynasty. The ruler in Buganda was Nakibinge, who was, later on, killed by the same Olimi, Rwiita – mahaanga (translated as destroyer of neighbours). This is just one example of how these Post – Bachweezi rulers were disturbing the peace of the Wealth – creators.

The Capitals of the Bachweezi that are known are: Ntutsi and Bigo – Byamugyenyi – both in Ssembabule district and the archeological items from there have been dated by Prof. Sutton as having been used between 900 AD to 1350 AD.

“Whatever a man sows, that is what he reaps,” the Bible says. The small kingdoms could not survive when the imperialists arrived. Even in the colonial times, tribalism encouraged by the small kingdoms, continued, now re-inforced by the new divisions “on behalf of God,” fomented by the newly introduced religions of Catholicism, Protestantism and Muhammadanism.

It is a tragic–comedy, to read what Capt. Lugard wrote about events here in Uganda in the 1890s. In a booklet entitled: “British East Africa” on Page 13, Lugard writes as follows:

“A warm discussion arose on many points, but I waived discussion till the reading was done. Then the chiefs were for signing, but the king held back and giggled and fooled; he demanded time. I replied by rapping the table, and, speaking loudly, said he must sign now.” “On December 26th Mwanga signed the document.’’

Here, Lugard was talking about how he forced Mwanga to sign some documents giving away Africa’s sovereignty.

These were the actors guarding our destiny at that time. On page 18, Lugard writes about more tragic– comedy. He writes as follows:

“Next morning, early, I found the whole country underarms for war. Masses of armed men were pouring in every direction and preparing for battle, being drawn up on opposite hills, the French Party (as the Catholics are always called), having, I think, the French Flag.”

On page 32, it is written as follows:

“The next day, Sunday, February 24th, while Captain Lugard was reading a letter, war drums rang out from the Catholic camp. The two parties were arranged for battle!!’’

On page 41, the booklet writes as follows:

“As in his negotiations with the Catholic Party, so in those now going on with the Mohammedans, Capt. Lugard was much annoyed and obstructed by the grasping selfishness of the Protestants, who, while anxious enough for peace to be concluded, wished to retain everything for themselves.”

These events were taking place around 1890. The other party is referred to, are the Protestant Party known as Ingleza (the English). These new religions, starting with Islam, had started coming to this area in the 1840s. The Christians only had started arriving in 1877 (Protestants) and 1879 (Catholics). By this time, Muteesa1 was still alive and, indeed, he at one time wondered whether the Protestants and the Catholics, worshipped the same God. The quarrels between Bishop Tucker and Father Lourdel amused Muteesa. In the Book by Bishop Tucker entitled: “Eighteen years in Uganda, East Africa”, on page 9, he writes as follows:

“We were not interrupted by them, however, until prayers were over and I began to read the scripture. I had read only the first verse when Muteesa, in his usual abrupt style, called to a coast man present to ask the Frenchmen if they don’t believe in Jesus Christ, why they don’t kneel down with us when we worship him every Sabbath. Don’t they worship Jesus Christ?”

It is so sad to see brothers and sisters agreeing to be torn apart by external influences in such a manner and after such a short time as to act against their own interests such as peace, wealth creation etc.

It is us (the crop-farmers, the cattle-keepers, the fishermen, the manufacturers, the service providers, the artisans etc.), that feed the country and provide the other goods needed, that earn foreign exchange for the Country, that create jobs, that pay taxes etc. The attitudes of the Wealth creators are, actually, captured in the four NRM Principles: Patriotism, Pan-Africanism, Social-economic transformation and Democracy. Genuine wealth creators, cannot believe in sectarianism because their economic activities will have exposed them to the importance of the market of a united Uganda. They soon also understand the importance of the wider African market – in other words, the importance of Pan-Africanism.

Here, in Kampala, I have two testimonies ─ that of James Mulwana and that of Burahimu Kibirige-both the late. Neither of them was in politics.

However, Mulwana was always fundraising for the NRM because he well understood that it is only that force, that could guarantee peace in Uganda and render her safe for business. It also had private-sector friendly policies, like the ban we imposed on the export of used batteries, which was what Mulwana asked me to do for his Company so that he gets batteries to recycle.

One time, I had gone to Hotel Africana for a meeting. Burahimu Kibirige was worried. When I inquired from him what the problem was, he told me. The problem was, that the Basongora herdsmen in Kasese, had poisoned and killed lions in Queen Elizabeth National Park in revenge for Lions eating their Cattle. Kibirige was worried that that act, would damage tourism. As you know, he built a hotel in Moroto, Karamoja. His concerns were national and his investments were national and, I hear, even Pan-Africanist. He understood the usefulness of Uganda and Africa.

As we go on, the difference between Wealth creators and parasites will become clearer. The ranks of the Wealth-creators are going to be swelled by the Parish Development Model and the Emyooga Programmes. These plans are aimed at converting the remaining 39% of the homesteads from okukolera ekidda kyonka (subsistence farming), to commercial farming and other money-generating enterprises, with ekibaro (cura, aimar, otita) ─ proper enterprise selection. They all must join the ranks of wealth-creators. It will improve our politics, incomes for homesteads, purchasing power for buying products of goods or services produced by our factories, create a wider tax base, creating more jobs for the youth and being able to support the places of Worship and political actors of our choice.

In conclusion, I seem to detect a linkage between Wealth-creation with Patriotism and Pan-Africanism and idleness with Parasitism, working for foreign interests and anarchism. Maotse Tung had detected something similar in China; that is why he talked of the unity of the 4 social classes, including the National Bourgeoisie and isolating the comprador bourgeoisie (those whose economic interests were in service of foreign interests). I think the four positive classes in Maotse Tung’s strategy were: the National bourgeoisie, the Workers (the Proletariat), the Peasants and the Patriotic petty bourgeoisie (teachers, health workers etc.). The Feudalists and the Comprador bourgeoisie were the parasitic groups.

The wealth-creators support peace because they do not want their economic activities to be disturbed and when they decide to fight, it is for a big reason- like when we decided to fight Idi Amin- because he had no capacity to understand Patriotism or Pan-Africanism which are crucial for our survival and prosperity. In 1970, I decided to work with the UPC, although we did not fully agree on all issues. However, with UPC, there was some possibility to push for some wealth creation efforts, e.g. restructuring the ranches and also some Pan-Africanist efforts – e.g. the East African Federation. To consolidate peace durably, expand and strengthen the ranks of wealth-creators. Right from the beginning, the NRM emphasized the point of “Protecting life and property.’’ It was actually pointed No2. in the 10 points programme. Principle No. 3 in the four principles of the NRM, is social-economic transformation. You cannot transform society, without wealth creation. The NRM returned the properties of the Indians because the country was using the entrepreneurship of these Indians to contribute to the transformation of our society.

Let everybody embrace wealth creation and the principles and strategies that support it (Patriotism, Pan-Africanism, Social – economic transformation and Democracy) and avoid idleness, dependency and parasitism.

I congratulate the OWC for, in the last 8 years, helping us to reduce abakolera ekidda kyoonka (subsistence actors) from 68% of the households to 39%, according to the latest UBOS survey. Let us use the Parish Development Model or the Myooga programme to convert all these into operators in the money economy with ekibaro. The USA, which is a new country, only born long after our own fratricidal actors of 1520 AD in the persons of Olimi Rwiita Mahaanga, Nyabugaro and Nakibinge, is now a superpower. Why? Partly, for the very reasons I have been telling you in this speech: respecting the Wealth – creators, creating a big market for them through integrating the former British Colonies into the nucleus of the USA in 1776, ensuring Peace etc. The NRM believes in reconciliation always. However, reconciliation must be around healthy principles that can create growth and transformation, not stagnation and sterility. Let us not repeat old mistakes. Africa has suffered enough. The future is bright if we act right.

I congratulate everybody and wish you a prosperous 60th year of Uganda’s Independence.

I thank all of you.