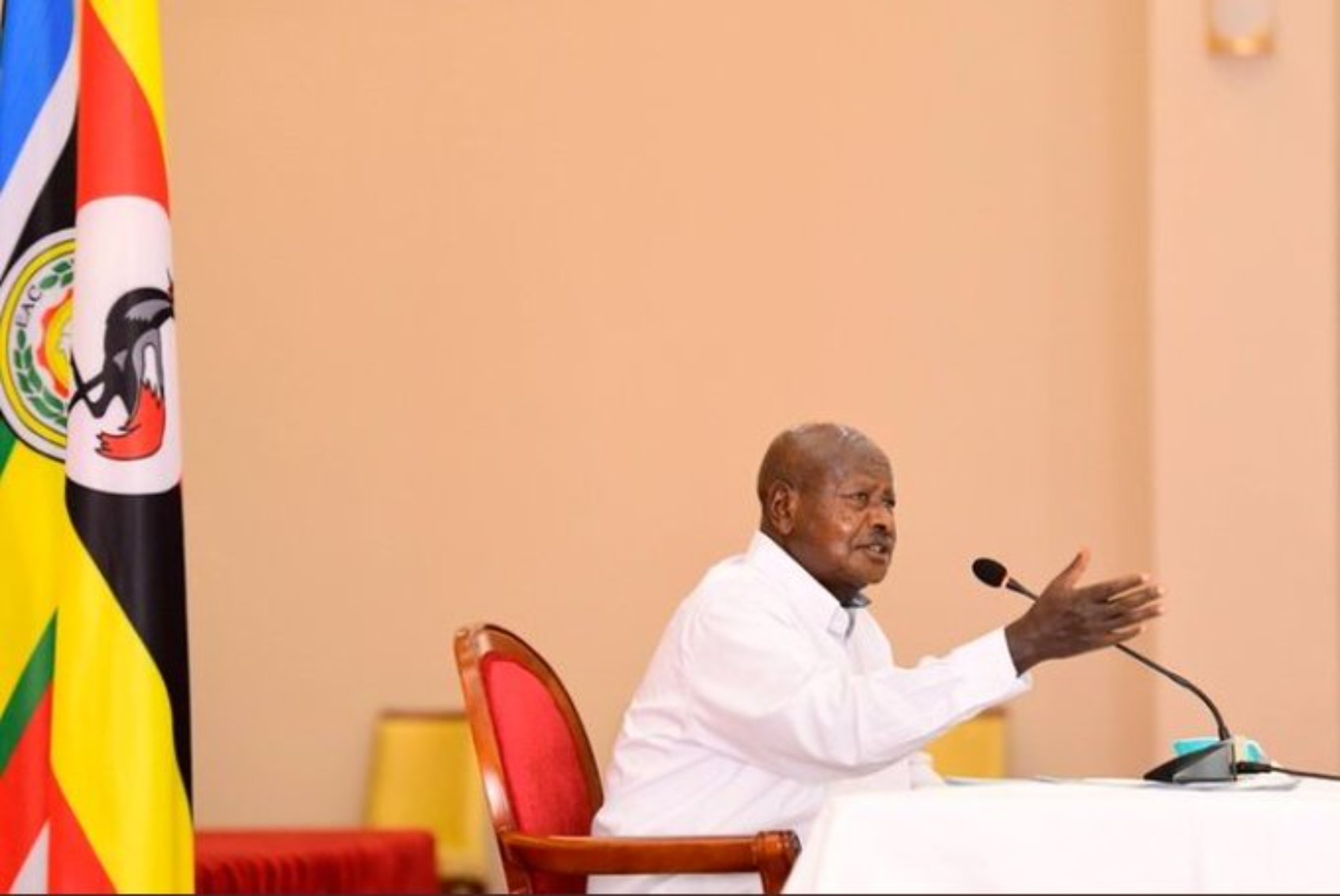 Your Majesties, Your Excellencies,
Ladies and Gentlemen,

Greetings from the people of Uganda. I thank Rt. Honourable Boris Johnson for hosting this Climate Conference. The climate problem is a consequence of damaging the environment by irresponsible and, sometimes, greedy human actions. It is also ungodly because, in the Book of Genesis, Chapter: 1, verse 9, God commanded as follows: “Then God said, ‘Let the waters under the heavens be gathered together into one place, and let the dry land appear’, and it was so. And God called the dry land earth, and the gathering together of the waters He called seas”.

Furthermore, nature, which is God’s creation, created mountains, swamps, lakes, forests, grasslands, etc., each with a separate function, in supporting life of animals and plants. However, irresponsible, greedy, ignorant, and rebellious human beings, do not respect God’s commands and nature’s tested and rational arrangements.

In Uganda, the irresponsible actors, have committed the following sins:
(i) Invading the forests that covered 45% of Uganda’s land area in 1900AD. These now only cover 12.4% of Uganda’s land area.
(ii) Invading the wetlands (swamps). These are, in fact, slow-flowing river tributaries of the Nile system. Uganda, being a plateau, these slow-flowing tributaries, are always, covered with swamp grass and plants such as papyrus (ebifunjo ─ cyperus-papyrus), ebigugu (cyperam latifolia), etc.

These river tributaries and their swamp grass and plants, are very crucial for the transpiration cycle of sucking water from the rivers and throwing it in the atmosphere as part of the factory work, for making rain. Invading them, is disrupting the water cycle in rain formation for both convectional and relief types, of rain.

(iii) Invading shores of the lakes and the banks of the rivers, destroying the vegetation there-on and, therefore, allowing the run-off water (Omutuunga, Omukoka, Alele), to carry silt into the water bodies and, gradually, silt them, apart from the danger of eventual eutrophication ─ aquatic plants that are encouraged by the mineral nutrients put in the lakes by the unfiltered run-off water, exhausting the oxygen in the water bodies and causing the fish to die off and disappear.

(iv) Invading and settling on mountain ridges that are steeper than 31%. Apart from destroying the forest cover that is part of nature’s instrument of capturing Co2 from the atmosphere and using it beneficially, through photosynthesis, to make food for plants and animals, the forests in the mountains, protect the water springs that eventually become rivers and their roots hold firmly the soil to avoid land-slides. There are, for instance, 18 rivers birthed by the Rwenzori Mountain and 17 birthed by Mount Elgon. On the Rwenzori Mountain, they are: Nyamwaamba, Mobuku, Rwimi, Nyamugasani, Lubiriha, Tokwe, Sebwe, Semliki, Kanyampara, Mahoma, Kamusongi, Karugutu, Mugusu, Bujuku, Bukurungu, Batoda, Kisindika, Mpondwe. Out of Mount Elgon, we get Malaba, Manaafwa, Mpologoma, Lwakhakha, Sironko, Suam, Sipi, Simu, Bukwa, Sisiyi, Muyembe, Sasa, Dirijana, Atari, Sitti, Namataala, Nabisiso, Chebonet.

(vi) Cutting of trees carelessly, outside the forest area, in the agricultural areas, deprives us of wind-breaks so that when eihuunga (windy rain) comes, crops and properties get destroyed. Besides, untamed wind, interferes with the cross-pollination of crops and, therefore, undermines the efforts for big harvests.
These sins committed by irresponsible, greedy, ignorant or anti-God rebellious Ugandan actors, result in damage to the environment but also into climate change in the following ways: first, 40% of our rainfall has, apparently, been from the local water bodies (Lakes and swamps mentioned above). Therefore, destroying them, interferes with this portion of our rain. It is, apparently, 60% of our rain, that comes from the Oceans. There is proof to this.

Of course, our forests and plants help in taking carbon dioxide from the atmosphere, globally.

We have, therefore, discovered and well understood, these sins and determined to reverse them. People in the wetlands and forests must leave and get alternative livelihoods. Resources need to be mobilized for this purpose, so as to ensure a soft landing for the transgressors, many of them out of ignorance or wrong Government actions in the past (e.g. the growing of swamp rice). With enough resources (money), this is doable. Let the World help where they can.

All the above, are our local sins. I cannot say petty sins, because destroying 40% of Uganda’s rain, cannot be described as petty sin.

In order to permanently remove the Ugandan potential sinners from temptation, we need to understand the strategic importance of the social-economic transformation of the economy and society. The Ugandan society must change from a pre-capitalist, subsistence-based society, to a middle-class, skilled working-class society. In order to create this society, we have been using four stimuli: universal education; full monetization of the economy (wiping out the subsistence economy); modernizing the economy (industrialization, digitization, and developing the services sector); and electrification of the economy, so that we do away with the use of the biomass for energy (fire-wood).

If you conserve under-development, you should forget about conserving the environment.

Having addressed the not-so-small sins by our irresponsible, greedy, ignorant or rebellious actors, I now come to the mega sins of who? Is it greed or was it historically determined ignorance? These sinners are the mega-emitters of Co2.

These are: the USA – 13%, China – 30%, India – 6.8%, etc. These need to lead the World in the retreat from the precipice (eneengo) into which they are threatening to throw all of us, the guilty and the un-guilty (nalumanya, n’ ssalumanya). Maybe in the past, people did not know; but we now know.

The good thing is that clean energy ─ solar, wind, geo-thermal, etc. ─ is becoming cheaper. Some years ago, a kilowatt hour of solar electricity was 40 American cents. It is now US 6cents or less or 10cents plus with battery. If we use solar power for factories, lighting, refrigeration and cars (land- transport), that leaves air-transport as the one that needs petroleum. That is not a bad arrangement. I am told, it would take away much of the 45% of the emissions contributed by the hydro-carbons (petrol, diesel, heavy fuel, etc.), to the atmosphere. Then there is the coal, not a hydro-carbon, but just a carbon. This, apparently, contributes 37% to the emissions of Co2 in the atmosphere.

Farming contributes 18.4% to the emissions if you leave the cow-dung outside to decompose naturally. If, however, you gather the cow-dung (amasha ─ not dung in African dialects ─ dung is for humans, mainly) and turn it into bio-gas, you get 13% of the emissions reduced and if bio-gas was to replace hydro-carbons in use, emissions would reduce by 240%.

Besides, we the oil producers, do not have to worry about our oil. There are safer uses for this oil for a long time. This is in the form of petrol ─ chemicals ─ not the dangerous buveera (light bags for packaging), but polyester for textiles, plastic chairs, car-seats, insulation for electric cables, use in fertilizers, use in medicines, etc. If safe technologies are used to process and dispose these, they have minimal emissions. What, then, is the problem?

Once we have dealt with the emissions of carbon-dioxide that traps heat in the atmosphere and causes global warming, then we need to deal with the gases that eat the ozone layer that protects us from the dangerous sun-rays. These are: methane (CH4), carbon-monoxide (CO), Nitrogen-oxides (NOx), Sulphur-oxides (SOx), ozone gas (O3), etc. These are, apparently, from mainly the combustion of inefficient car engines, inefficient refrigerators but also from decomposing swamp grasses (naturally occurring).

The naturally occurring methane gas from swamps, is said to be negligible. In any case, the peat in swamps can be safely converted into energy. Therefore, the dangerous ozone layer eaters are the other ones: ozone gas, carbon-monoxide, Nitrogen- oxides, Sulphur-oxides, etc., which are, mainly, from poor quality engines. The answer is to either completely replace those combustion engines with electric cars or, in the short run, have more efficient combustion engines.

It is, therefore, possible to do the following to save the homo sapien sapien and other life-forms:

The wise man, the wise primate (mammal), has been improving his condition of life by using his superior brain to understand the laws of nature (gravity, pressure, magnetism, etc.) and use them to improve the lot of man on earth. Our knowledge is now much greater. Let us use it to improve the lives of all people on the earth but also do it safely and cheaply and, apparently, it is doable. I had not focused my mind on this issue at the global level. Apparently, there are safe solutions.

Therefore, let the World banish greed, ignorance, irresponsibility and rebelliousness, save our planet and use our greater knowledge to ensure affluence for all the people of the World.

Yoweri Kaguta Museveni
PRESIDENT OF THE REPUBLIC OF UGANDA