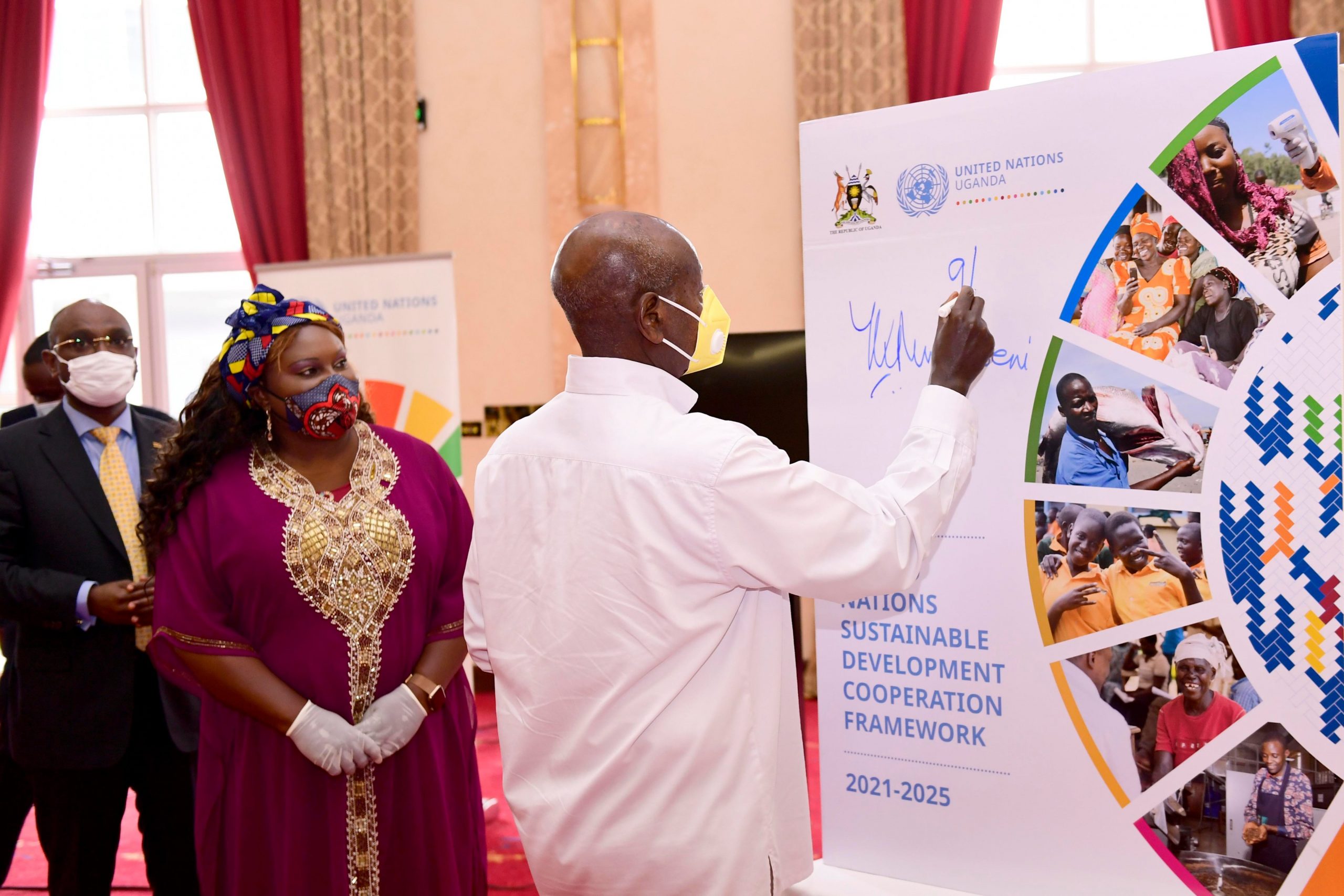 President Yoweri Museveni has applauded the United Nations commitment for its continued support in acceleration of the Sustainable Development Goals and Leave No One Behind in Uganda.

The President also appreciated the great collaboration established over the years with the United Nations in Uganda, supporting efforts in governance systems, effective economic management, environmental sustainability and integrated and effective partnerships within the country and across our borders.

He was speaking at the launch of the UN Sustainable Development Cooperation Framework for Uganda 2021 – 2025 which took place on Wednesday, at State House Entebbe.

Mr. Museveni noted that the UN has partnered with the Government and other institutions to address humanitarian needs in refugee hosting Districts as well as in response to mudslides, floods and locusts. The UN has been a partner in strengthening health responses, including the fight against Ebola, malaria, Marburg and now COVID-19.

“I thank the United Nations and the leadership of the UN Resident Coordinator in ensuring that the UN Development System Reform translates into concrete results to achieve 2030 Agenda and to enable stronger collaboration and integrated partnerships as articulated during my strategic dialogue with the UN Country Team in 2019 in Mbale” He said.

“It jumpstarted the Cooperation Framework consultative process during the launch of the Spotlight initiative, among other initiatives that I was glad to lead. I want to congratulate the United Nations and appreciate the spirit of partnerships and commitment to ‘The Future We Want, the UN We Need: Reaffirming our Collective Commitment to Multilateralism’” he added.

He hoped they will further deepen the focus on youth employment, entrepreneurship and education programmes, including access to reproductive health information and services.

Adding that the process for Cooperation Framework Development came at a bad time when Covid-19 brought widespread economic, social and human impact.

“In Uganda, we took early actions in containing the outbreak and flattening the curve of the pandemic. This pandemic has become a test to resilience to many countries and societies. I express appreciation to the United Nations for its critical interventions offered and for the unwavering dedication and support to the Government and People of Uganda in these unprecedented times. When I met with the UN Leadership in Mbale – July last year, we discussed the Eleven Bottlenecks Africa is facing and how we can work together to address them” the President added.

These include; Ideological disorientation explained as sectarianism of tribe and religion as well as gender chauvinism. Interference with the Private Sector, Under-developed Infrastructure (electricity, roads, the railway, the telephone, the ICT back bone etc.), Weak States, especially the Army, the Police, etc, Fragmented Markets, Market Access and Expansion, Lack of industrialization and low Value Addition, Under-development of Human Resources (lack of education and poor health), The under development of Agriculture, The under-development of Services Sector (banking, insurance, tourism, etc.), The attack on Democracy and Governance and Non-responsive Civil Service.

The president said that both the UN and Government of Uganda are committed to contributing towards the development and social transformation of a society where good governance, observance of human rights, gender equality; economic prosperity; and effective engagement and participation of people are sustained.