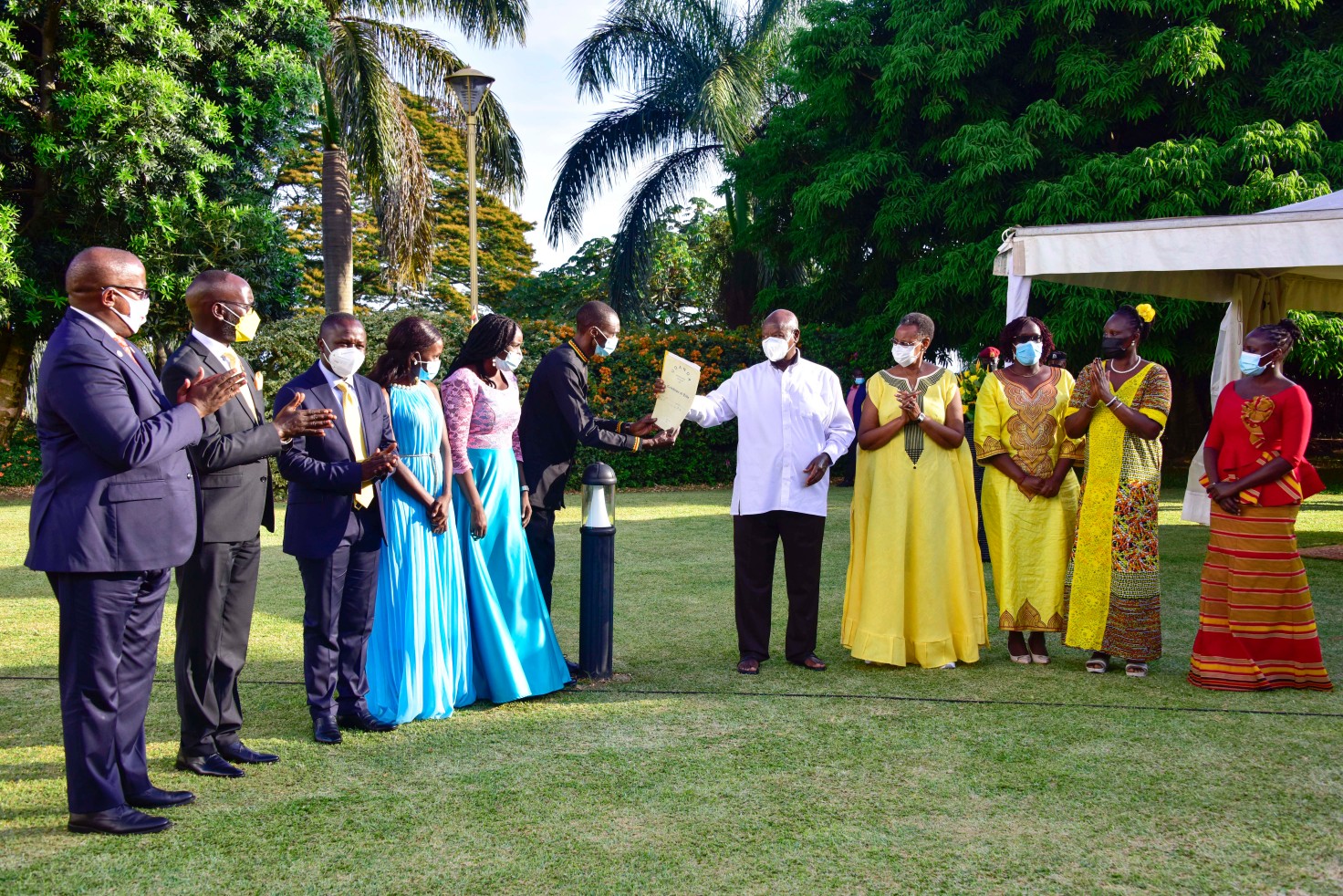 President Yoweri Kaguta together with the First Lady also Minister of Education and Sports, Hon. Janet Kataaha Museveni have hosted different groups of sportsmen and women under the National Council of Sports who recently excelled in different sporting activities at the world and continental stages.

The event was held at State House, Entebbe on Thursday.

The president used the occasion to reiterate the government’s commitment to continue supporting sports excellence in Uganda which he described as a culmination of broad-based development and transformation.

He was, however, quick to add that Sports activities have been able to succeed due to the peace and stability of Uganda.

“Like if there’s no peace in the country, how will sports thrive,” H.E Museveni said, adding that personalities like John Akii-Bua won Gold in September 1972 when the country was insecure but more medals are coming up in areas like Kapchorwa because “there’s some peace in that area now,” he noted.

According to President Museveni, sports is aimed at among other qualities, building teamwork and stamina, entertaining, determination, competing and excelling, not forgetting to be well known in the world, something which Team Uganda has done very well.

“Sports is a good training area in all these qualities. I thank you sports people for taking advantage of the opportunities which have come to Uganda in the 36 years because of peace and coming out to use your talent,” Gen Museveni said.

The Head of state reiterated his commitment to support medalists who win at continental, commonwealth, Olympics Games and All Africa games with placement in the government structures like the army, Uganda Police and Uganda wildlife Authority “so that when they’re placed there, they earn a living, keep training and also do a service to the nation”, citing an example of Gold Medalists Steven Kiprotich, Joshua Cheptegei and others who are employed in Uganda Prisons service and Uganda Police Force respectively.

“This was in order to motivate but also support our sports people. But I still insist that with sports what you’re doing now is just the beginning (endozo).”

The President encouraged Sportsmen and women to get involved in the Parish Development Model (PDM) which is aimed at getting all the homes out of what he termed as “moneylessness”.

“Now you’ll see how that will impact sports. The PDM is part of sports development in terms of money making and good nutrition to support sports,” The President added.

He also supported the idea of appropriating the coaches of different sports disciplines.

“Because you cannot reward the product and forget the planter. That’s not good. We shall see how to handle them in a systematic way,” H.E Museveni assured.

At the same function, the President also handed over a land title to the family of the late John Akii-Bua who won the first gold for Uganda in 1972.

He also handed over a vehicle to the long-distance runner Victor Kiplangat who won Uganda her first-ever Marathon gold at the Commonwealth games. Kiplagat recorded the fastest time of 2:10:55 to clinch gold in Birmingham in July this year.

The First Lady and Minister for Education and Sports Mrs Janet congratulated Team Uganda for raising the Ugandan flag high at different sports events this year and appreciated the financial support received from the Government.

“Your Excellency, our sportsmen and women did not win medals, their performance, nonetheless, was exceptional and enabled Uganda to be highly ranked at the different events, raising our profile, especially in the Africa region,” Mrs Janet Museveni said.

She then highlighted a few exceptional performances like that of the Olympic Gold medalist, 3-time World champion in athletics and world record holder in 5000m and 10000m Joshua Cheptegei, The Olympic Champion in 3000m steeplechase, Peruth Chemutai, The Olympic medalist, Commonwealth Games “double champion” and world record holder in the half marathon event, Jacob Kiplimo and The 2019 World Champion in 800m Halima Nakaayi, not forgetting the two of Uganda’s netball players; Peace Proscovia and Nuba Mary who received “The Most Valuable Player” titles in tournaments they played this year.

“This would not have been possible if these team members had not intentionally exerted themselves through hard work and their personal sacrifice, which enabled them to excel,” The First Lady added.

Mrs. Museveni also informed the President about another team of 990 young sportsmen and women from 43 schools who participated in the Federation of East Africa Secondary School Association games, where 4 countries participated and Uganda emerged overall champions with a total of 41 medals: 18 Gold, 10 Silver, and 13 Bronze.

“Mr President, it is my hope that at an appropriate time you consider hosting them as well,” she added.

As a Minister of Education and Sports, she further noted that the Government is making substantial investments in sports development like the Teryet Training Centre which she visited on Tuesday this week.

“We are hopeful that when the construction of the High-Altitude Centre in Teryet and the renovation of Nambole National Stadium is complete, we will have standard facilities, not only for training but also for hosting international sports events,” The Minister noted.

The Minister of State for Sports, Hon. Peter Ogwang said different countries have already written to the Ministry to visit and start using Teryet Training Centre in Kapchorwa.

Former Gold medalist Mr Steven Kiprotich who represented the Chairperson of the National council of sports and Joshua Cheptegei also addressed the gathering.

The president of the Uganda Olympic Committee, Dr Donald Rukaare and the Government Chief Whip who was the Contingent commander for the Commonwealth Games 2022 as a state Minister for Sports at that time, Hon. Hamson Obua also thanked the government for supporting the sports sector that has marketed Uganda internationally.

“There’s no single success registered without your strategic leadership Mr President and the guidance of Mama the First Lady and Minister of Education and Sports,” Hon. Hamson Obua said.

Also present at the ceremony were MPs from Sebei region, representatives from the Uganda Netball Federation and Presidents of different sports Federations, Members of the National council of sports, and Executive committee members of the Uganda Olympic committee among others.