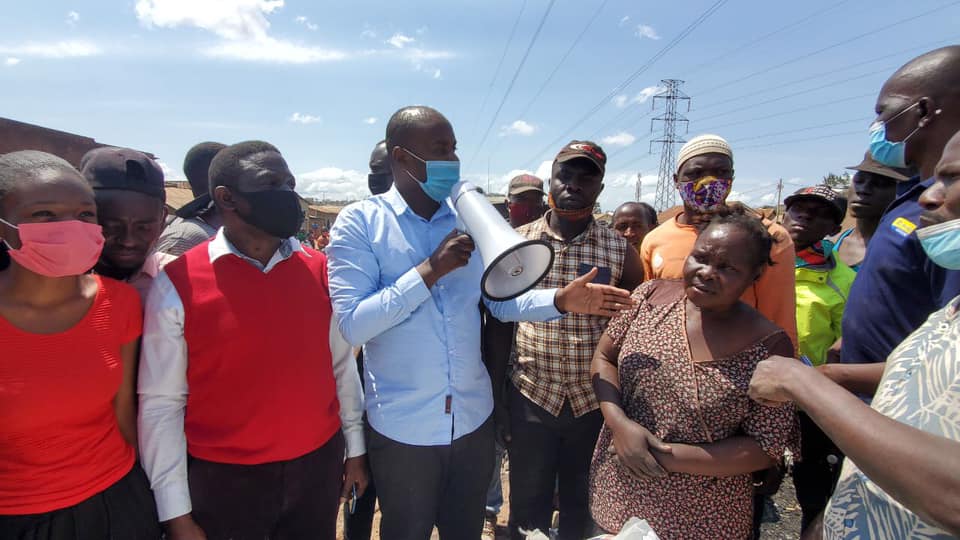 The National Unity Platform, NUP party has Friday extended relief in form of food and temporary shelter to some of the victims of the Friday fire in Kamwokya.

Two people were killed while another is fighting for life at Kiruddu hospital, following a fire that gutted houses in Kyamuka Zone, Kamwokya. The fire also destroyed properties worth millions of shillings.

Luke Owoyesigyire, the PRO KMP identified the deceases as Okware Stephen, a resident of Mulimira Zone and Amiya Caroline a resident of Kifumbira zone in Kamwokya.

Robert Kyagulanyi the NUP President says he learnt of the unfortunate incident and sent in his sympathies.

“Yesterday I learnt of the unfortunate fire breakout in Kamwokya which left several people dead and many others injured. More than 200 people who lived on the land were left without shelter- including children. I have spoken with the area leaders and expressed deepest condolences to the families of the deceased” Kyagulanyi said.

He expressed gratitude to the party leaders including the Secretary General and Chairman Nyanzi who spent the morning interacting with the victims and extending the much needed support to them.

Kyagulanyi also encouraged other well-wishers to do the same.

“It is unfortunate that most fires in this country have not been fully investigated, and this one will most likely follow the same fate! In the meantime, we are putting together resources to support victims of the Nyamwamba floods in Kasese District like we did last year. We continue to appeal to all citizens who have means to reach out to fellow citizens in this tough period, especially those who have been hit by different tragedies” he said.