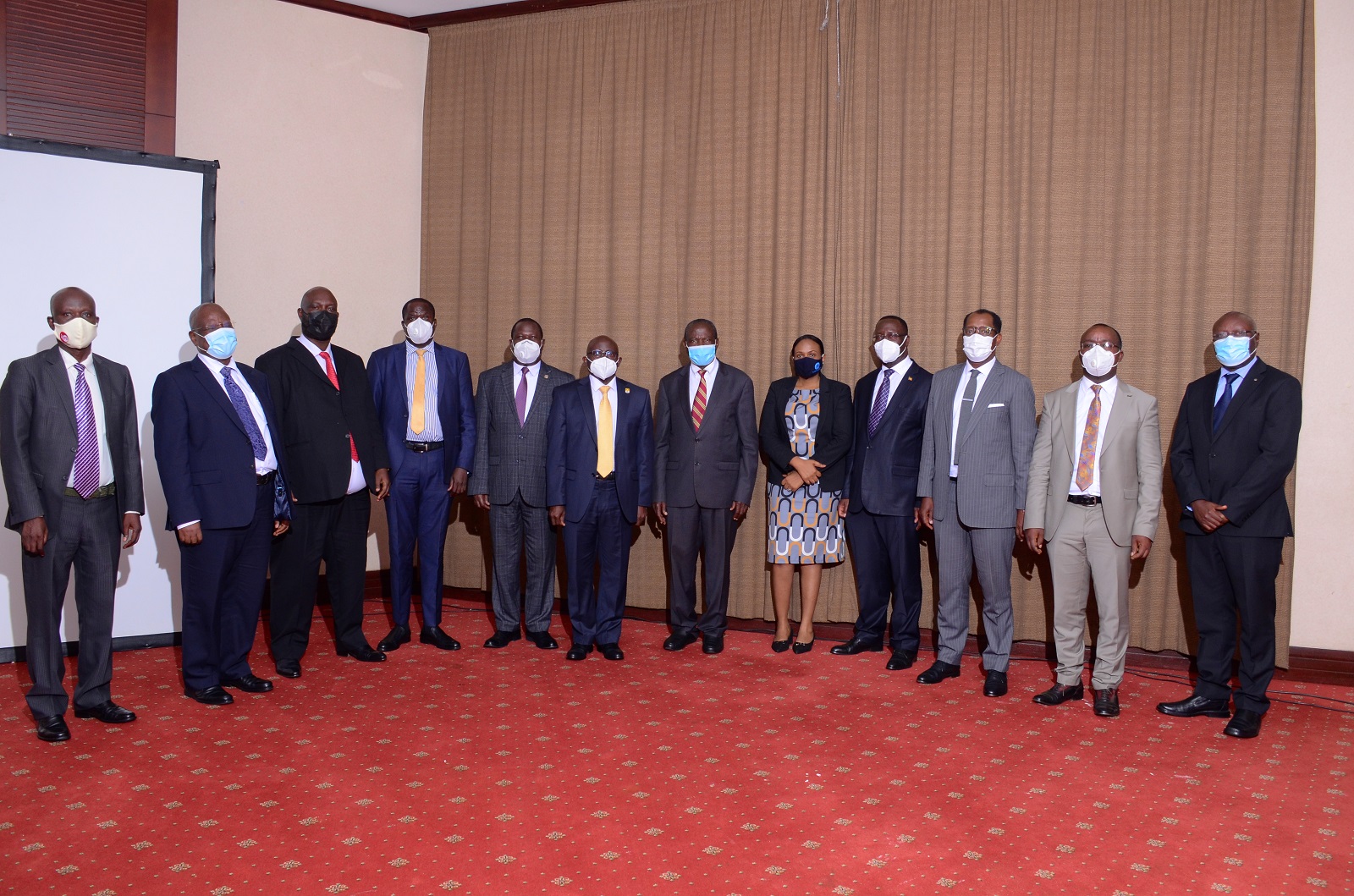 The National Social Security Fund today unveiled the New Board of Directors/ Trustees who will oversee the operations of the Fund for the next three years.

Speaking during the official unveiling ceremony at Kampala Serena Hotel, The Minister of Finance, Planning and Economic Development, Hon. Matia Kasaija who unveiled the new National Social Security Fund Board of Directors congratulatedthe outgoing Board, for steering the Fund through an era of growth. ‘’You have exited the stage without any blemish on your record of service and I commend you for that,” he said.

The Minister also encouraged Ugandans to learn the habit of saving money early so that they do not get setbacks at the time of retirement.

The Fund’s new Board Chairman, Dr. Peter Kimbowa said that the 12th Board is ready to steer head the Fund in the right direction. “We pledge to be open minded and curious to ask the right questions. We will ensure transparency and accountability as all individuals and teams within the Fund. We also plan to remain very adaptive so that we can move with the times, but also ahead of the times since we are in the post pandemic era and artificial intelligence has become part of our lives,” Dr. Kimbowa said.

He also noted that the main vision for the fund in the next three years is to reshape the funds portfolio to respond better to the business environment, prioritize and leverage on technology,data and analytics platforms so as to serve members better through problem solving.

‘’We are going to look at the opportunities to see how to grow the fund for the next generation solutions,” he added.

NSSF Managing Director, Richard Byarugaba also expressed his gratitude for the outgoing board for having performed exceptionally well. ‘’Statistics reveal that there’s growth in our assets under management from UGX 5.6 trillion at the start of their first term in 2015, to about UGX 15.4 trillion this year, a growth of 175% in just 8 years,” he said.

Byarugaba explained that the Fund is currently undergoing a 4th milestone since it was set up. 1. The first was the action of establishing the Fund as a Department in the Ministry of Labour.2. The second milestone was formation of the NSSF as a body corporate through enactment of the NSSF Act in 1985. For all intents and purposes, the Fund envisaged by the 1985 law.3. Stability and unprecedented growth over the last decade, augmented by our 2015 – 2025 Strategic Plan. This milestone has brought to bear the fact that social security needs of the country have changed, and the very structural set up of the Fund needs to change.4. Lastly, the NSSF Amendment Bill (2019), which once enacted into law will usher in significant reforms, especially around the removal of the contribution’seligibility threshold, voluntary contributions over and above 15%, and mid-term benefits.

The composition of the 12th Board is founded on a tripartite arrangement that includes; Representatives from unionized workers through the National Organization of Trade Unions (NOTU) and Confederation of Free Trade Unions (COFTU), Employers under Federation of Uganda Employers and Government – through representatives from the Ministry of Finance, Planning & Economic Development; and Ministry of Gender, Labour & Social Development.