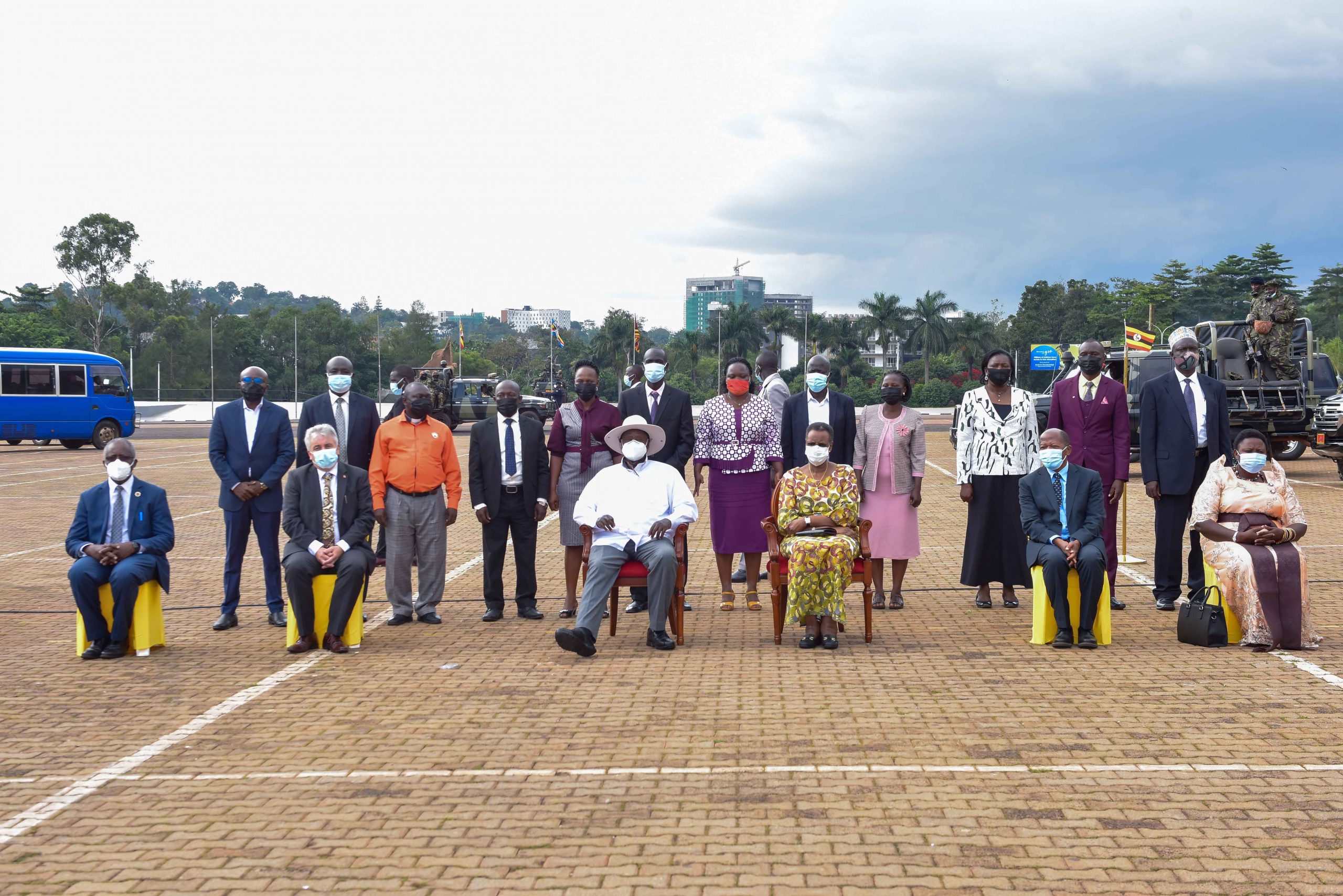 While officiating at the belated World Teachers’ Day Celebrations at Kololo Independence Grounds in Kampala on Wednesday, under the theme: “Transformation of education begins with teachers,” His Excellency General Museveni said the mission of the National Resistance Movement (NRM) Government since coming to power in 1986 has been to ensure the socio- economic transformation of Ugandans.

“Because now we are not under the kings, we are not colonial agents. We are a National Resistance Movement. Our mission is socio-economic transformation of our people by moving away from the non-money, traditional, pre-capitalist non-money economy to a money economy with a society, composed of the middle class and the skilled working class,” H.E Museveni said.

The President who was flanked by the First Lady and Minister of Education and Sports Mama Janet Museveni, told teachers that whereas Education is an element in socio-economic transformation, it must be the right type of Education, which addresses the country’s needs to get rid of peasants producing another peasant.

“This one we don’t accept. The NRM says we must build a skilled working-class society like in Europe where the whole society is either middle class or skilled working class. Please teachers, if you want to help your country, get this. Let everybody enter into the money economy through education and the four (4) sectors of Agriculture, Manufacturing, Services and ICT,” he urged.

To achieve the NRM mission of socio- economic transformation, the President called upon teachers to support his idea of free education (Education for all) to enable children of the poor study free in Government school. He also expressed dismay over non-cooperative headteachers that are obstructing this move by introducing unnecessary endless school charges that have in the end discouraged children from Education and many have ended up dropping out of schools.

“When we introduced this in 1997, enrollment went up from 2 million children to over 10 million in primary schools. But up to now, you bring charges in schools and the children drop out. The completion rate in UPE is 32% in the whole of Uganda because children drop out due to the school charges. If the capitation grant is not enough, why don’t you raise that?” Gen Museveni wondered, adding that this would enable the government to concentrate on building more classroom blocks and laboratories plus equipping them.

“Therefore teachers, I congratulate you on this day but I really want less obstruction and I will not accept threats,” Gen. Museveni said.

On salary increment, President Museveni and teachers under their umbrella body, Uganda National Teachers’ Union (UNATU) again sharply disagreed over the government’s plan to increase the remuneration of only science teachers, leaving out their arts counterparts.

The President said that the government will not backtrack on the decision and asked UNATU leadership not to resist his efforts or put him under pressure after knowing that the government is prioritizing scientists first to encourage Science and Technology Innovation under the science-led development strategy.

“I want to inform the teachers that money is not made by witchcraft and secondly, I’m not God who in the book of Genesis said let there be earth and water and it was made. For us in NRM we don’t do things by miracle, we do things by work, sacrifice and struggle. When it comes to expenditure, you must prioritize. If somebody is against prioritization we disagree and we can only have a fall out,” Gen Museveni said, warning teachers to stop the indiscipline.

The General Secretary of UNATU, Mr Filbert Baguma who spoke highly about the role of teachers at the forefront of transforming Education, informed the President that whereas he remains committed on his grand plan for scientists, this does not take away the fact that a 300% salary increment for one category of teachers versus nothing (0%) for others is unfair.

“We appreciate what was given to one category of teachers and we look forward to you keeping your promise to bring all other categories of teachers on board since the increment has left the teaching fraternity disunited and has affected the team work which is required for the delivery of quality education,” Mr Baguma said.

He also presented the plight of teachers in private institutions who decried job security and salary disparities.

“These teachers request for support from the Government in setting minimum pay regulations for teachers in private education institutions. Many meet challenges in trying to access bank loans and others are working for meagre pay with threats of dismissal if they complain. This can change if there is a regulation on the minimum pay for a private teacher,” he added.

“I taught people who created a new army the National Resistance Army (NRA) which did not exist, now called Uganda People’s Defense Forces (UPDF) starting with 5 people in 1971 and for 17 years (1971 to 1987), I was teaching these soldiers to defend Uganda and contribute to security of the region with no pay but for patriotism,” Gen Museveni said, adding that he doesn’t need a long lecture about the importance of teachers “because I’m a teacher myself”.

He said since 2006 the NRM government has been prioritizing developing its infrastructure like roads and electricity to facilitate production.

“We were putting more money (6 trillion) on roads because we know that connectivity and electricity were important,” he added.

The First Lady and Minister of Education and Sports Mama Janet Museveni congratulated teachers on this day, describing it as an opportunity to hear from each other.

“As one Runyankore proverb goes; “Ezaguruka zitaragaine ziterana amapapa” meaning that if two birds fly together without agreeing on how to go, they bump into each other’s wings. Therefore, it is wise and necessary to set some time to hear from each other, especially since both government and the teaching profession play a major role in nation-building,” the First Lady said, adding that teachers are not just supposed to teach in the classroom alone, but they are supposed to disciple nations.

“The training we give should indeed address the head, the heart and the hands and this should go beyond the classroom to the communities where we live. This means that teachers have a big role to play especially in developing countries such as Uganda,” she added.

Hon. Janet further said the teacher as an agent of transformation should be a disciple-maker for the nation – raising responsible, skilled, and patriotic citizens who love their God but also love their neighbours just as they love themselves.

She said the government sees teachers as part of the solution, offering feasible alternatives that are sustainably transformational.

She further recognized the contribution of the Government of Ireland, the New Vision, and Simba Travel, for the Program on Teachers Making a Difference.

He also requested the Government to subsidize the tuition costs or even implement an education loan scheme to attract more teachers to upgrade in time and get the required minimum qualifications.

Mr Baguma further called upon colleagues in the profession to remain proud of who they are as great contributors to grooming other professions.

“Our influence is lifelong! It does not matter whether you teach Arts/Humanities or Sciences and if you serve in the Pre-Primary, Primary or Post Primary Education sub-sector. All teachers matter. All teachers are important. No one should ever make you feel inferior. You are all valued. Always remember that your contribution can not be taken for granted,” Mr Baguma said.

The winners received different prizes that included among others; Computers, Printers, electronics and schools sports equipment.

State Ministers for Education, Dr John Chrysostom Muyingo (Higher Education) and Dr Joyce Moriku Kaducu (Primary Education) performed the awarding of the best teachers on behalf of the President and the First Lady.

The President congratulated the best teachers, saying, “That means there are some good teachers in Uganda. I congratulate all those teachers who are doing their best.”

The annual World Teachers’ Day is aimed at celebrating the critical role of teachers in transforming learners’ potential.

Others were, the Ambassador of Ireland to Uganda, Members of Parliament and representatives of Diplomatic Missions in Uganda.