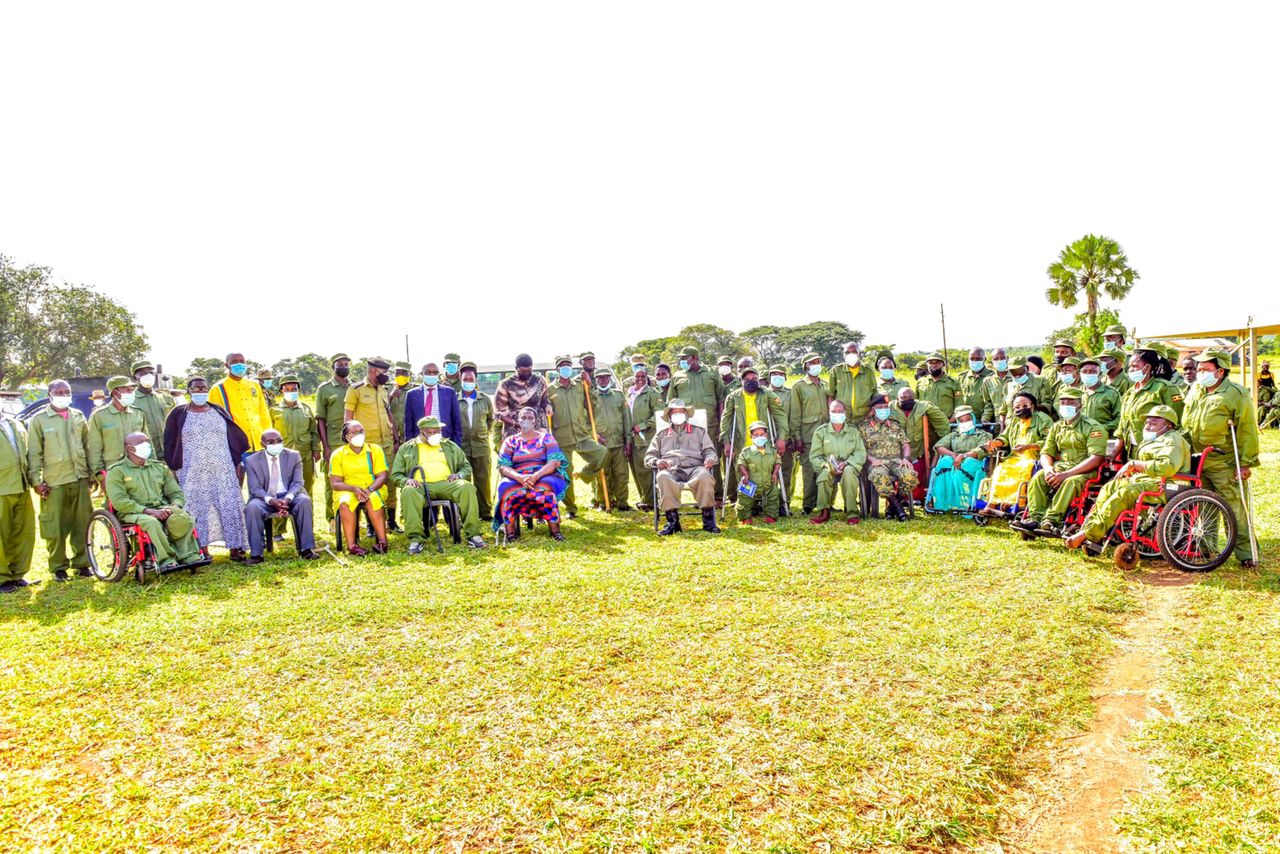 President Yoweri Kaguta Museveni has directed the Minister of State for disability to write a cabinet paper including a strategy for the prevention and management of disabilities in Uganda.

The President made the directive while delivering a lecture of opportunity to over 300 leaders of People With Disabilities (PWDs) from the Eastern and Central regions, who have been undergoing a one-week Ideological and Transformation Leadership retreat at the National Leadership Institute (NALI) in Kyankwanzi, today Tuesday.

“We should prevent to the maximum fresh disability because much of it is prevented. We should Manage and prevent it where possible,” H.E Museveni said.

He stated that the National Resistance Movement (NRM) has demonstrated that disability can be prevented by getting rid of diseases like Polio, Measles and this strategy should be amplified.

He noted that some diseases like Spina Bifida, Hydrocephalus, and Cerebral palsy are detectable and preventable at early stages while other conditions like Autism, Down Syndrome, Blind and deafness that are not easily detected and prevented can be managed.

H.E Museveni, therefore, urged the National Council for Persons With Disabilities to work closely with the Ministry of Health to minimize the causes of disabilities as much as possible.

“The National Council for Disability should not just confine itself to managing our people who are already disabled. It should also work with the Ministry of Health to prevent and educate our mothers and all of us to know what to do in order to avoid new disability cases”, President Museveni said, adding that those who are already disabled will be looked after well and give them all the opportunities they need because many of them can perform.

Statistics for the Uganda Bureau of Statistics Census Report (UBOS 2016) indicate that 12.4% of the Ugandan population, lives with some form of disability implying that approximately 4.5 million Ugandans are persons with disability hence a development concern.

This disability tribe should not increase in number, according to Gen. Museveni.

“Don’t say because disability doesn’t mean inability therefore the tribe should increase no! they should not increase (Njagala basigale awo). Now you can imagine if we had not intervened against Polio and Measles, what would be the numbers now? Many of the polio people are the UPC people (the ones who got polio under UPC government) but my own grandchildren I doubt very much that there are many Polio victims,” H.E Museveni remarked.

The President promised to support them and use them as demonstration centres in the 4 acre Model of farming and also recruit some of them into the army especially those with special skills in computers and ICT.

The Minister of State for Disability Affairs, Hon. Grace Asamo thanked the President for accepting to close the retreat, which she described as an unmatched transformative intervention to have people with disabilities come together for skilling.

“The majority are still in shock, for they cannot believe that someone at a level of a Head of State can prioritize a person with a disability whom society had otherwise condemned as a curse. Your

Excellency, this is the first time of its kind that we come here and we pray that it is not the last of its kind,” Minister Asamo said, adding that another group from Western and Northern Uganda will also receive the training later this year.

She proposed to the NRM party to have the retreat carried out annually for people with disabilities.

“So that by 2026, we would’ve had a critical mass of leaders, people who are ideologically upright and transformed as leaders,” the Minister said.

The Director of NALI, Brig Gen. Charles Kisembo said that the trainees applied themselves very well and proved that disability is not inability. He further noted that the trainees now know the foundations of Uganda’s ideology and what informs it, Patriotism,

“They have grasped an understanding of the leadership philosophy that informs and widens their perception of the world. We are sure that they have gone away with knowledge and commitment to transform their country, ” Brig Gen Kisembo said.

Other topics covered included; Mindset transformation, Transparency and Accountability at the local government level, Civil-military relations, Harnessing resources for empowerment and prosperity, financial literacy and how people with disabilities can benefit from industrial hubs.

Brig Gen Charles Kisembo however, observed that the first ever retreat of People with Disabilities organized by the Ministry of Gender and Social Development has been a lesson to management at the leadership institute.

“Your Excellency we have determined that every infrastructure NALI develops must have a provision for the PWDS, starting with the houses that are undergoing rehabilitation. Three of those houses will be re-designed and equipped for people with disabilities,” Brig Gen Kisembo said.

He added that the Institute will boost its human resource component to care for their needs through among other interventions regularly inviting people with expert knowledge to equip our trainers with relevant knowledge and skills in handling people with disability.

Ms Mbabazi Violet, a female councillor PWDs Kassanda district who spoke on behalf of other participants thanked the President for the opportunity to be skilled at NALI and promised to continue supporting his development agenda.

“You know we don’t have any other parent other than you. We’re your children and we’re speaking NRM. We confirm that we’re behind you,” Ms Mbabazi said.

The retreat was also attended by among others Members of Parliament representing people with disabilities and the district leaders of Kyankwanzi.

Continue Reading
You may also like...
Related Topics:Featured, Museveni, PWDs