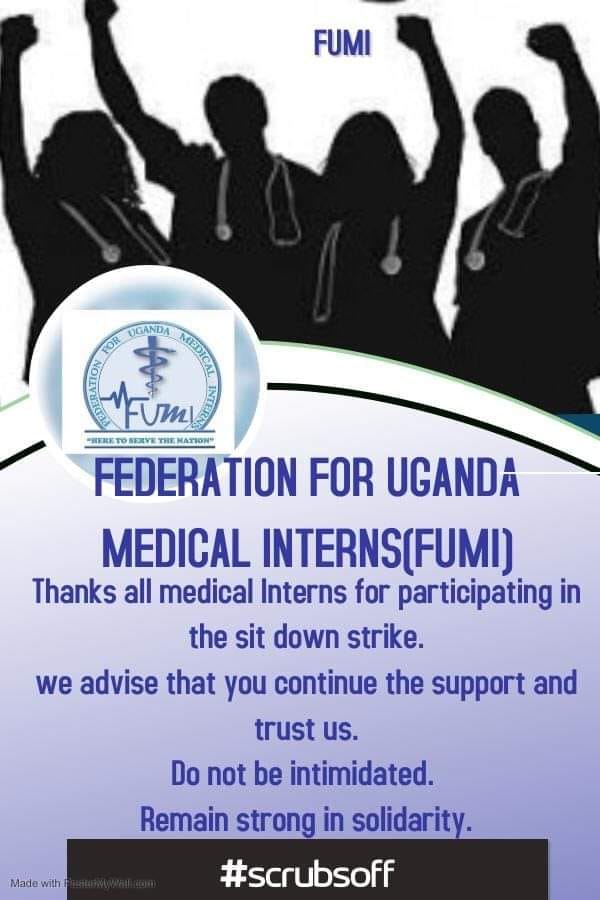 A strike by medical interns in Uganda may not be ending soon, after ignoring a directive by the Health Ministry to return to work or leave the program.

Now, the Uganda Medical Association (UMA), a body that brings together all qualified and duly registered medical doctors in the country has announced its support for the interns who are seeking better salaries.

The medical interns laid down their tools on Monday 17th May 2021 in protest of the government’s failure to increase their allowances in the 2021/2022 national budget and provide for their housing. Government had earlier committed to increasing the allowances from 960,000 to three million Shillings, however this did not happen.

A total of 1,403 medical interns are currently on strike in hospitals countrywide, which has put lives of thousands of patients who seek services from government facilities at risk.

According to available records, medical interns carry out over 80 per cent of the duties at health facilities.

Last week, the health ministry directed all interns interested in learning to go back to their workstations or abandon the programme. The directive was issued by Dr Henry Mwebesa, the Director-General of Health Services noting that those who want to continue striking, should abandon the year-long programme and return when the money they need is available. However, the UMA on Sunday (yesterday) noted that the strike should continue until government heeds to the demands of the interns.

Dr. Richard Idro, the Uganda Medical Association president says they are backing the interns so as to obtain decent pay and living conditions. The President says they want the parliamentary resolution that was made some time back to increase their allowances from 12 billion shillings to 35 billion shillings to be implemented within this coming financial year because it sought to address all their grievances related to improving on their welfare.

UMA says there is also urgent need to review and overhaul all parts of medical training in Uganda because they have realized that some of the institutions for interns do not have all the necessary equipment.