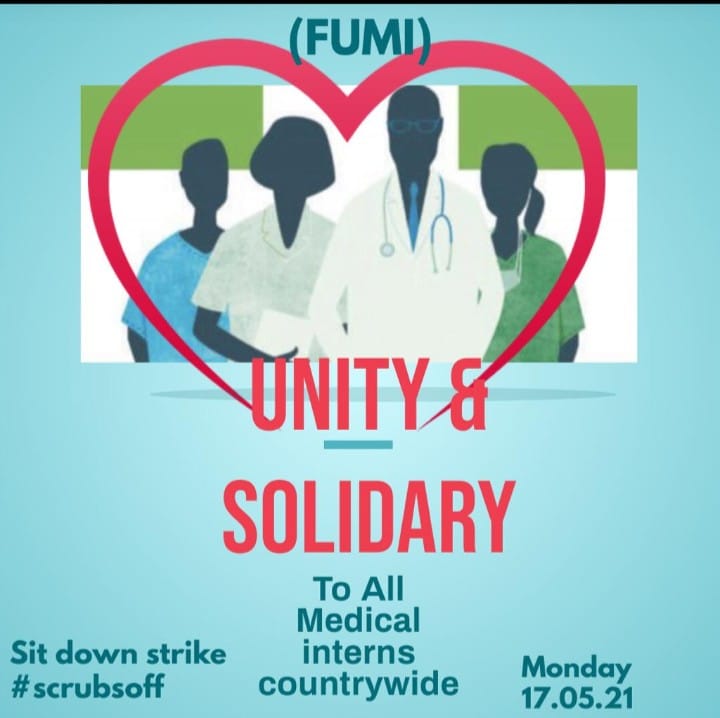 Medical Interns across the country have officially laid down their tools following failure by government to improve their salaries.

Under their umbrella body; the Federation for Uganda Medical Interns (FUMI), the interns claim to want government to increase their allowances from 960,000 to three million Shillings and provide housing for them.

The Ugx3 million was proposed by the health committee of Parliament and was expected to be given to the interns starting with the 2021/2022 financial year. However, this was not budgeted for.

The committee recommended that medical interns’ allowances be raised to three million Shillings for doctors and 2.2 million Shillings for nurses as gross income.
Now, Dr Mary Lilian Nabwire the FUMI president says they have gone on strike starting today Monday 17/05/2021, because their pleas for a raise in allowances as promised before was in vain.

However, Dr Nabwire says that the 35 billion Shillings which was to be added to their annual budget of 12 billion was not included., implying that the recommendations were not absorbed into the budgeting process. The interns, therefore, agreed that they are not ready to work amidst poor conditions.

“Government has been promising us to increase our money but they have not. Other cadres got an increase but we were left out. When we wrote to them, they did not take us seriously yet the situation we are working under is hard. Interns are working hungry because the money they receive is not enough,” Dr Nabwire said.

Medical interns in Uganda provide a great service as the country’s patient-doctor ratio as recommended by the World Health Organisation is still low.