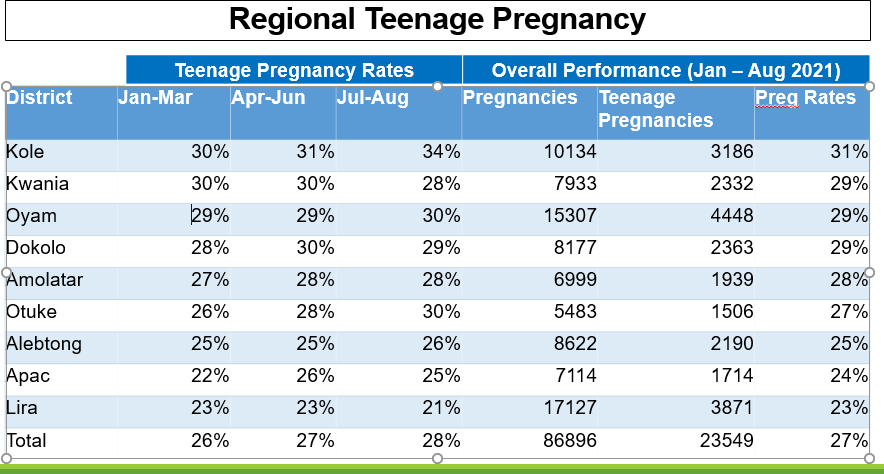 Over 23,000 teenage girls have been impregnated in the Lango sub-region in the last 8 months.

According to a new report by Communication for Development Foundation Uganda (CDFU), an NGO, data collected between January to August 2021 indicated that 23,549 teenage girls visited health facilities in the Lango Sub-region for antenatal care services.

According to Mr. Okeng David the program manager of CDFU Apac, negative gender norms, poor parenting coupled with greed for dowry is partly to blame for the increasing teenage pregnancies.

He added that other factors including poverty and ignorance, peer pressure, and breakdown in social protection are also to blame.

In Apac district, 6 cases of pregnant girls under 15 – 3 were reported in Akere Division, 1 in Apoi S/C, 1 Ibuje, and 1 Teboke. The highest teenage pregnancy rate still remains in Chegere S/C at 32%, Teboke 28%, and Apoi at 25. Least seen in Atik Division at 11%. Arocha Div registered 0% due to no resident reporting facility. District rate is 24% while regional stands at 27%.

However, the researchers concluded that the number could be slightly higher since some could have not visited health facilities to seek antenatal care services.

According to the data collected we got from the Biostatistician Health Department Apac District Local Government, Oyam registered the highest cases of teenage pregnancies with 4,448 cases, followed by Lira with 3,871, Kole registered 3,186, Dokolo 2,363, Kwania 2,332, and Alebtong 2,190.

Okeng also blamed the high cases of teenage pregnancy on negligence by parents. In Apac, the cases had declined towards the end of 2020 but skyrocketed again starting January 2021.

The numbers have been increasing since the closure of schools in March 2020.