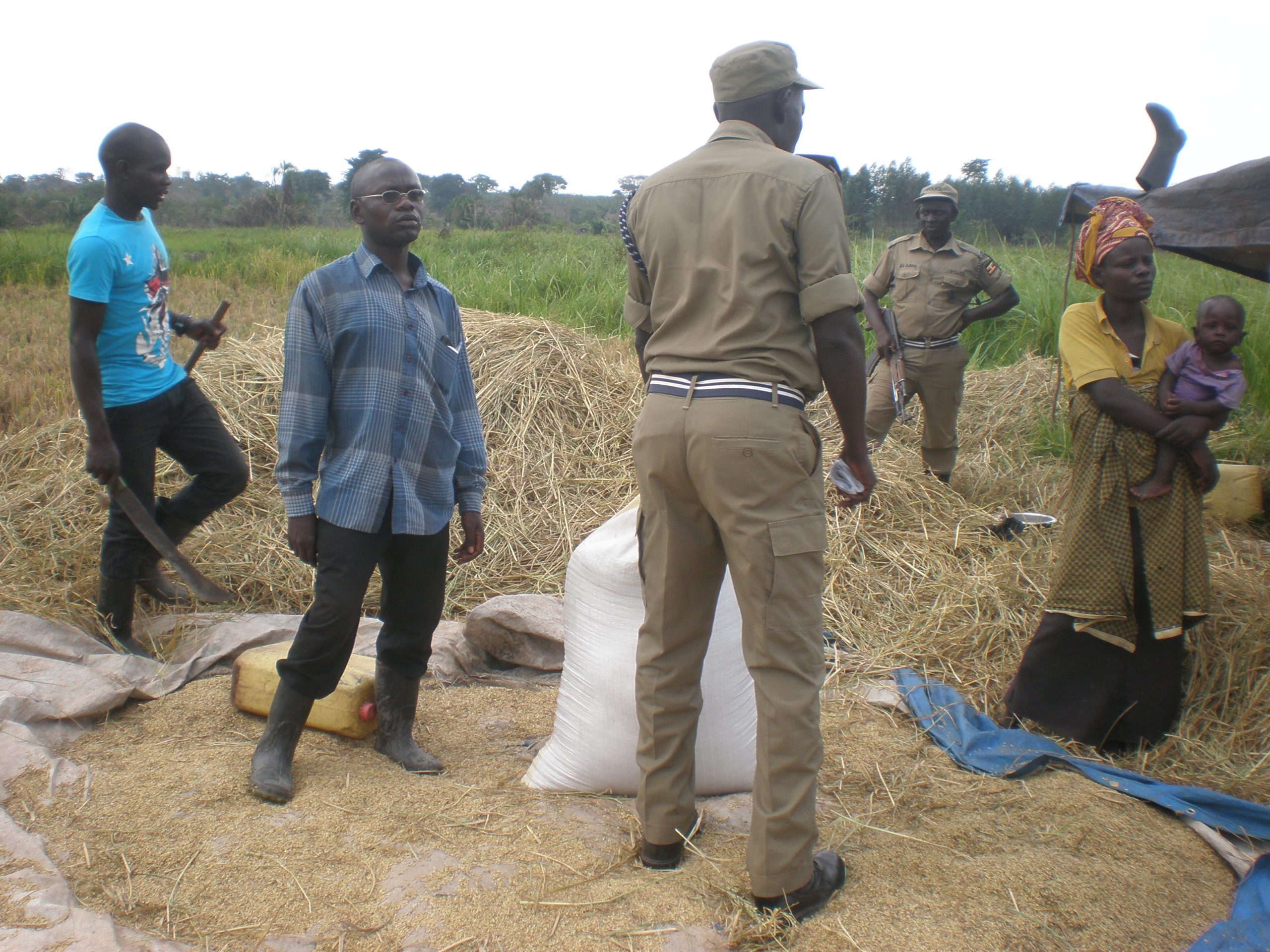 The continuous unchecked encroachment on wetlands in Kakumiro district of Western Uganda by illegal sand miners and cultivators is exposing the region to the disastrous effects of climate change.

According to the National Environment Management Authority-NEMA 2019 report, over 16 wetlands have been depleted as a result of illegal sand mining in Kakumiro district.

During the COP26 in Glasgow, the President of Uganda in his statement to leaders at the summit from different walks of life listed what he described as sins that Ugandans were committing.

The sins according to Yoweri Museveni are; invading forests, wetlands, lake shores and river banks among others. These he said had put Uganda at great risk of facing harsh climate change catastrophes.

‘‘Invading wetlands (swamps). These are in fact, slow-flowing river tributaries of the Nile system. Uganda, being a plateau, these slow-flowing river tributaries are always covered by swamp grass and other plants like the papyrus (cyperus papyrus). These river tributaries and their swamp grass and plants are very crucial for the transpiration cycle of sucking water from the rivers and throwing it into the atmosphere as part of factory work to make rain. Invading them is disrupting the water cycle in the rain formation for both conventional and relief types of rain’’ reads part of president Museveni’s document presented during the COP26 in Glasgow in 2021.

After admitting to Uganda’s mess on the environment, President Museveni committed to having the sinful trend reversed.

‘‘Of course, our forests and plants help in taking carbon dioxide from the atmosphere globally. We have therefore discovered and well-understood our sins and are determined to reverse them. People in wetlands and forests must leave and get alternative livelihoods’’ Museveni committed to environmental protection before COP26.

He pledged to take a lead role in mobilizing resources and ensuring that what he called ‘sins’ are stopped by having all invaders of wetlands, forests, lake shores and river banks forced out.

However, with few months remaining to COP0-27, there is no sign of implementing the president’s commitment in Uganda.

According to National Environment Management Authority NEMA July 2022 status report, wetland coverage in Uganda declined from 15.6% in 1994 to 8.9% by 2017 at a rate of 2.5% per year. NEMA warns that unless radical measures are instituted immediately to restore the integrity of Uganda’s wetlands, coverage may reduce to 1.6% by 2040.

The continued encroachment of wetlands, river banks and lakeshores is a manifestation of the government’s failure to implement its commitment to COP-26.

Currently, Kakumiro district is faced with mass crop failure due to drought and this has culminated in untold famine.

The Kakumiro district environment officer Christopher Waguma says that the natural resources department is underfunded by the central government. He says protection and restoration of the wetlands requires a stable working financial budget and manpower.

‘‘We don’t have enough funds to support the activities of restoring the wetlands and other degraded natural resources like forests. We try to advocate for funds in vain. The other challenge is that we don’t have enough labour to cover the whole district’’ says Waguma.

Yikiziriza Sensiyo a climate change and environment advocate with World Vision says Uganda has not walked the talk on climate change commitments as COP27 knocks on the door.

He says human destruction of the environment especially in forests and wetlands has continued under the watch of the government.

‘‘Uganda is not walking the talk. Central forest reserves are no more. There is habitant fragmentation whereby what used to be a home for world animals has been reduced and this affects biodiversity.

Some other animals are becoming vermin like in places like Kangombe forest, chimpanzees are fighting with local people’’ says Sensiyo during an interview.

He adds ‘‘there is a problem of sand mining in wetlands and no one is asking key questions….no one is bothered. All wetlands have been encroached on by rice growers and it’s very absurd once a wetland it is tampered with, it affects the water table and this results in many problems. We can’t get water for irrigation, wildlife and domestic use. People are using herbices and other agrochemicals in spraying plants in wetlands killing aquatic life and other forms of biodiversity’’.

Sensiyo says all climate change mitigation strategies should move from paper and be put into practical implementation.

‘‘National climate policy is good but they are just on paper. Local governments are supposed to develop ordinances on matters affecting society like climate change but nothing has been done.

There is a need for sustainable land use le agroforestry, nutrient recycling, maturing and government should also provide incentives…..to enable people to co-exist with the forests and wetlands; like provision of beehives and fish farming’’ suggests Sensiyo.

Lack of political will.

Waguma says there is a need for the local and national leadership to have a will to fight against climate change by supporting the financing of the programmes aimed at mitigating climate change.

President Museveni has officially written to the Ministry of Water and Environment, Sam Cheptoris to effect the eviction of encroachers on wetlands, river banks and government forests with immediate effect to mitigate the effects of climate change.

“I am therefore directing you to remove all the people on the wetlands, shoreline, river banks and government forests,” Museveni said in an April, 22 directive.

The President was disappointed that an environmental plan that had been put in place to protect wetlands, steep mountain ridges, shorelines, and river banks had been “ignored universally and we are beginning to see the consequences.

According to the 2022/2023 financial year budget, the government committed about USD 164 Million in climate change and environmental degradation.

‘‘Climate change is a significant risk for agriculture production, and food security. In order to mitigate environmental degradation, we have set a target to increase the national forest cover from the current 12.4 per cent to 15 per cent. Central Forest Reserves will be protected from encroachment by re-surveying and marking of 6200 square kilometres of the boundary.
60. Madam Speaker, 850 square kilometers of wetlands and forests will also be restored by having them demarcated and gazetted, and evicting all encroachers’’ reads the budget speech given by state Finance Minister Matia Kasaija in June 2022.

However, local governments are yet to get the funds nearly three months after reading the national budget.

A 2008 report by LTS international on Climate Change in Uganda; titled Understanding the implications and appraising the response raised red flags that make Uganda highly vulnerable to the effects of climate change.

‘‘Uganda is highly vulnerable to climate change and variability –its economy and the wellbeing of its people are tightly bound to climate.  Human-induced climate change in the coming century has the potential to halt or reverse the country’s development trajectory.   In particular, climate change is likely to mean increased food insecurity; shifts in the spread of diseases like malaria; soil erosion and land degradation; flood damage to infrastructure and settlements and shifts in the productivity of agricultural and natural resources.  It will be the poor and vulnerable who feel these impacts the hardest, though climate change has serious implications for the nation’s economy’’ reads part of the report.

Ugandans are paying the ultimate price for climate change.

In July 2022, a river in the Eastern part of Uganda burst its banks, leaving over 20 people dead.

Over 150 households whose homesteads were washed away by floods during the heavy rains that hit the area when River Nabuyonga, Namatala, and Nashibiso burst their banks.

‘‘Climate change manifests in many ways including extreme heat conditions (heat waves), above normal rainfall, melting glaciers, and raising water levels. In recent years there have been droughts and floods alike in several parts of the country including Isingiro, Karamoja, Bundibugyo, Kasese and surrounding areas. In 2019-2020 Uganda experienced rising water levels in the Lake Victoria, Kyoga, Albert and River Nile basins’’ said NEMA in  statement posted on its website.

‘‘Climate Change is attributed to an increase in the amount of greenhouse gases in the atmosphere on a global scale, owing to an upsurge in the use of fossil fuels. And yet the rate of absorption of greenhouse gases by carbon sinks such as forests is also compromised by an increase in the rate of deforestation. As a matter of fact, Climate Change is being manifested more severely now than ever before and the occurrence in Eastern Uganda is one such incident’’ says NEMA.

Dr Mohammed Hassan the water resources expert at the IGAD climate (ICPAC) in response to a questionnaire sent to him for purposes of this story for re-afforestation and restoration of wetlands such that they can act as water detentions and reduce peak stream flows.

‘‘It is a natural phenomenon for the surface of the lake to increase when the inflow increases. It is important to keep this in mind and ensure that future development areas are far/high enough from the lake inundated areas. Reafforestation and re-claiming of wetlands are also crucial as they act as water detentions and reduce peak stream flows. The use of climate information for water management is also critical to reducing the impact of climate change’’ says Dr Muhammed.

Failure by leaders to implement actionable strategies on climate change and lack of political will, is likely to plunge Uganda into climate change-related catastrophes.