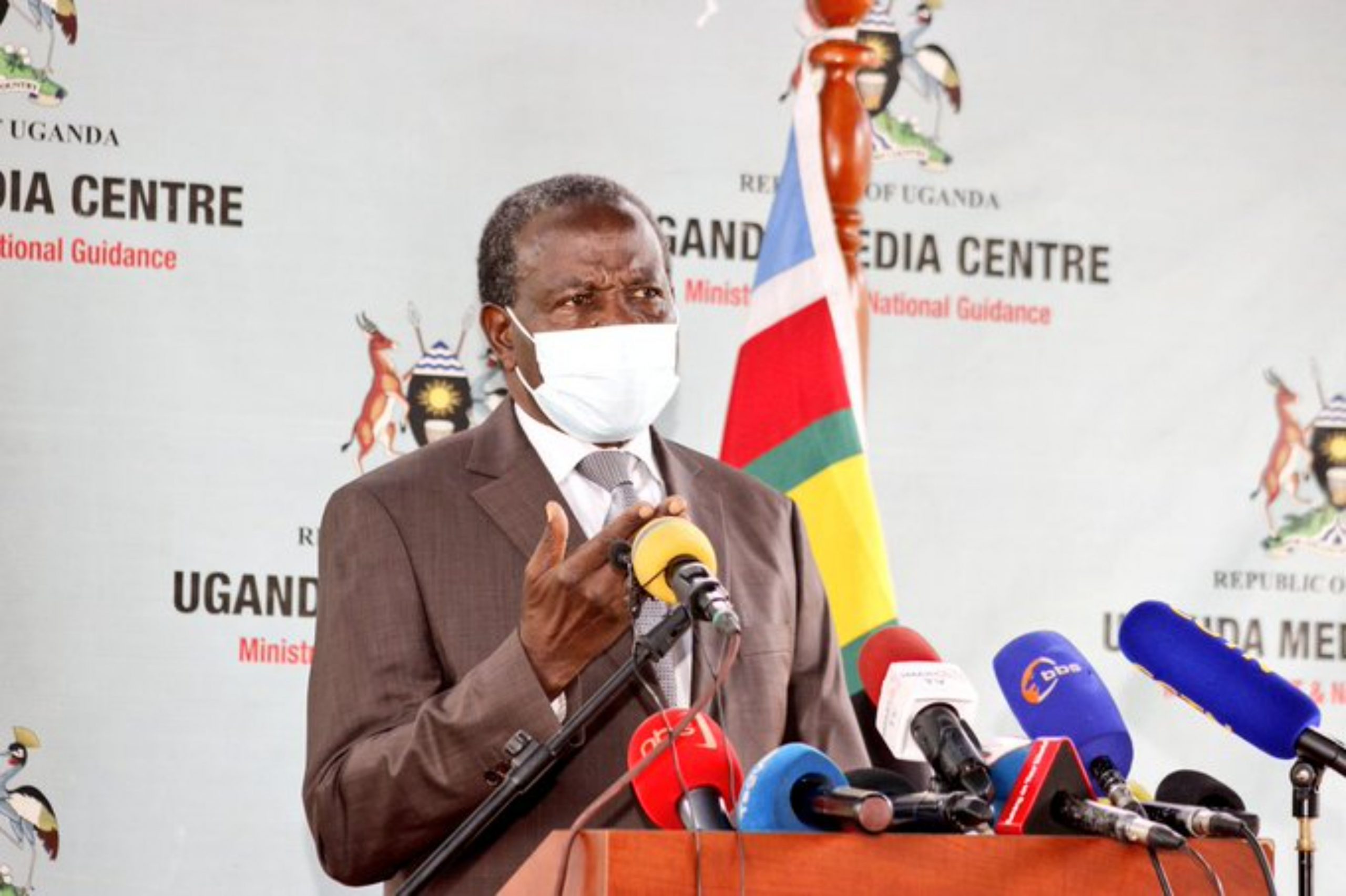 The Minister of Finance, Planning and Economic Development Hon Matia Kasaija has said that the recent increase in the prices of essential commodities is a result of events that have occurred outside Uganda, including the COVID19 pandemic and the Russia-Ukraine.

While addressing reporters at Uganda Media Centre on Tuesday, the Minister said that Uganda is a net-importer of intermediate raw materials used in the production of items such as refined cooking oil and laundry bar soap.

In particular, the prices of cooking oil, laundry bar soap, fuel (petrol and diesel) transport-fares increased and caused discomfort among the public. According to information from the Uganda Bureau of Statistics (UBOS), cooking oil has registered the highest rise in price by 21% between December 2021 and February 2022, and a 77.6% rise in the past year.

He told reporters that the effect of COVID-19 restrictions across the world disrupted supply chains leading to higher transport costs and a shortage of intermediate raw materials used to produce items such as soap, cooking oil and others.

“In the recent past, the global economy has faced high shipping costs, a shortage of shipping containers, and higher fuel prices; leading to supply shortages globally. In addition, adverse weather conditions in South America has led to low production of wheat and edible oils. Secondly, the full opening of economies globally following relative containment of Covid- 19 has led to a rapid rise in aggregate demand for a number of fast-moving goods (FMGs) beginning with oil, yet production levels had been constrained by Covid-19 restrictions. This has led to increasing in prices everywhere in the world,” says Kasaija.

He added that the situation has been worsened by the Russia-Ukraine conflict which has further disrupted the supply of oil, cereals such as wheat, corn, and sunflower oil, as well as essential metals like aluminium and nickel. The two countries are major producers and exporters of these commodities.

As a result of these factors, the Minister says prices of several commodities and services in Uganda have increased significantly and raised overall inflation. The affected commodities include cooking oil, soap, fuel, and education services.

He argues, however, that the rise of prices in Uganda, is much lower compared with current global trends, adding that inflation has risen everywhere in the world including in advanced nations, emerging economies and poor countries.

At 3.2% in February this year, minister Kasaija says Uganda’s inflation remains within the target (of 5%) and one of the lowest in the region despite the increase in prices of some of the essential items.

According to the Finance minister, the prices of cooking oil and laundry soap have risen mainly due to the rising price of crude palm oil in international markets. Approximately 70% of crude palm oil used as an input in the production of these two commodities is imported. Manufacturers import this raw material mainly from Malaysia and Indonesia-the two leading surplus producers of palm oil. In 202 1, the two countries accounted for 84% of palm oil exports (Indonesia 59% and Malaysia 25%),

In the past two years, crude palm oil prices have almost doubled driven mainly by two factors: Increased demand for palm oil, driven by the growing importation by China and India-the two largest buyers of palm oil globally, and Severe labour shortages in Malaysia due to Covid-19 protocols, export restrictions introduced in Malaysia and Indonesia that limit the export of crude palm oil as well as extreme weather conditions in Malaysia and Brazil which have affected palm oil production.

“In addition, the decrease in the global sunflower and soybean oil exports from Brazil, Peru, Argentina, which are close substitutes of crude palm oil, has increased the demand for palm oil and related products thereby propping up the prices. Furthermore, the ongoing geopolitical tensions between Russia and Ukraine – the two nations that account for half of the global supply of palm oil substitutes have exacerbated the global shortages resulting in higher prices of raw materials,” the minister said.

He also explains that the supply of raw materials has been affected by increasing logistic and transport costs. Transport and logistics providers have increased their prices to meet the growing demand for their services following the full re-opening of most economies in the second half of 2021 and early 2022. To offset the increases in freight and transport-related costs, manufacturers are passing on these costs to consumers.

Minister Kasaija says the domestic fuel prices have increased considerably mainly due to two factors, that is the increase in international oil prices by over 70% between January 2021 and February 2022 leading to the rise in domestic pump prices and the impact of the recent fuel shortages caused by a strike at the Uganda-Kenya border in Malaba related to Covid-19 testing requirements. This caused an artificial shortage of fuel.

Adding that the rise in domestic fuel prices has partly contributed to an increase in the distribution costs for the manufacturers since they rely on trucks to transport both raw materials and final products to markets.

While the recent increase in the prices of some essential items, especially laundry bar soap and cooking oil, is a cost-driven phenomenon explained majorly by international factors, it has come to the attention of the government that some unscrupulous speculators are taking advantage of the situation by hoarding essential artificial supply shortages and drive-up prices. “We are working with the relevant agencies to investigate this matter and we will take action against any operators found to be engaged in this practice.”

The Minister says that the main causes of the recent increase in commodity prices are external and thus beyond the ability of policymakers in any one country to deal with directly. “We should not panic or alarm our people. This is a temporary situation that is going to subside sooner or later.”

Now, he says that the government is going to respond as follows:

The government through the Bank of Uganda will continue to monitor the situation and respond, whenever necessary, with appropriate monetary policy to ensure inflation stays within target and maintain macroeconomic stability.

The government will continue to support our farmers to grow more food and vegetable seeds and cereals to take advantage of the rising global and regional prices to boost our export earnings.

The government will also continue to support the citizens and businesses to recover their sources of livelihoods from the impact of the Covid-19 pandemic so that they can weather such shocks. The provision of funds such as EMYOOGA, money in UDB, Microfinance Support Centre and the Small Business Recovery Fund is meant to help Ugandans revive their businesses and offer employment and markets for products produced in Uganda.

In addition, the Government has started implementing the Parish Development Model so that the 39% of the households in subsistence may join the money economy and build capacity to withstand shocks such as price hikes.

Furthermore, the environment of high global commodity prices presents opportunities for Uganda to take advantage of. In the oil sector, we have completed all pre-conditions for production including securing the required financing and right of way for oil and gas-related projects. We will expedite the implementation of project activities to ensure a timely start of oil production to bring in more dollars to boost our reserves so that the Bank of Uganda has enough arsenal to fight inflation.

Kasaija argues that the global shortage of palm oil, sunflower, and soybeans provide an opportunity for Uganda to scale up production of the commodities to replace the imported content. “Government had already foreseen shocks that may arise from disruptions in countries where we import raw materials and embarked on mitigating actions. We have partnered with BIDCO to grow palm oil in Kalangala and will provide more land to BIDCO and Bukora Ltd in Sango Bay to grow more palm oil. In addition, we are also working with 40, 000 farmers in northern Uganda to grow sunflower and soybeans for manufacturing oil.”

“To cushion consumers against high fuel prices, the government through the Ministry of Energy and Mineral Development is re-considering its regulatory role in the domestic fuel market to ensure that fuel price movements are a true reflection of the economic environment. In so doing, we will benchmark the approaches taken by our neighbours in the region. In the medium to long term, we will continue to focus on infrastructure development in particular road maintenance and the rehabilitation of the meter-gauge railway in order to reduce on the time and cost of transportation.”

Continue Reading
You may also like...
Related Topics:Featured, High Prices

Everything to Know About Holi, the Kansai Plascon Sponsored Festival of Colors
Plascon donates paint to Kawempe Mosque
Advertisement