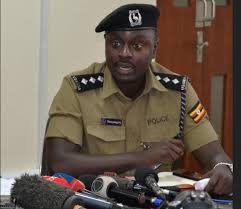 Officers at Katwe Police station have arrested one person in relation to a violent incident of assault and robbery that took place on 26.12.2020 at around 2200hrs.

Luke Owoyesigire the Kampala Metropolitan police spokesperson identifies the victim as Musisi Baker who was riding his motorcycle UEA 144B TV Star black in color on Luwafu Road, Makindye Division when he realized that two boda boda riders were trailing him.

Musisi reduced speed and decided to stop thinking they were probably security officers signaling him to stop.

However, one of the perpetrators parked in front of Musisi’s motorcycle and the other parked on the side, charged at him; “You are the people keeping the man in power” before hitting him with an iron bar on the head.

Although the victim was wearing a helmet, the force of the iron bar broke its shield and injured his left eye.

The suspects fled the scene and Musisi was later found by passers-by and rushed to hospital.

Police at Katwe has intensified the hunt for the suspects and so far one has been arrested with the help of CCTV footage.

The suspect is being held on allegations of robbery and assault.