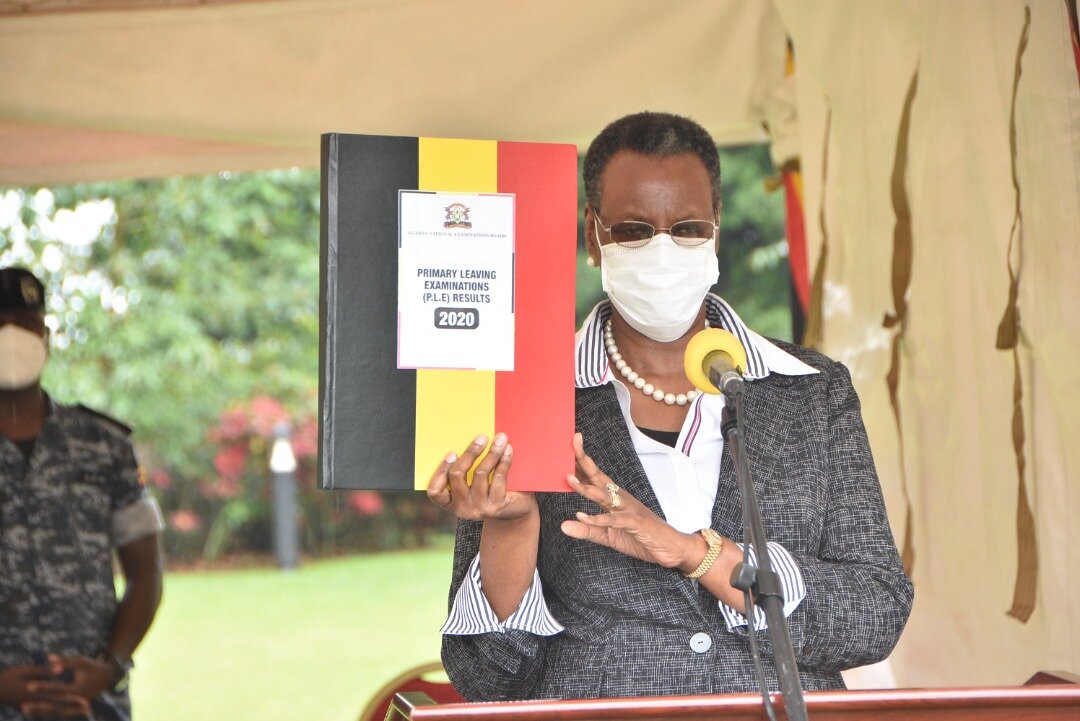 The Uganda National Examinations Board (UNEB) has Friday presented to the Minister of Education and Sports, Janet Kataha Museveni, the Results of the 2020 Primary Leaving Examination (PLE) which was conducted on 30th and 31st March 2021. The Minister consequently released the results of the examination that was conducted under the theme: Integrity and Security in the Management of Examinations, the Health and Safety of the Learners is a joint Responsibility.

Despite the COVID-19, the results show an overall improvement in performance as compared to the previous year. Meanwhile, results of 2,220 candidates have been withheld due to examination malpractice. The most affected candidates are from the Rwenzori region, especially Bundibugyo district.

The above table indicates that candidature increased by 53,957 (7.75%) over the previous year. This is the highest rate of increase recorded. Candidature has been increasing by an average of 2.5% over the last five years.

The Board registered 1,599 learners with special needs of various categories.  The blind, the deaf, the physically handicapped and the dyslexics among others.  Of these, 752 (47.0%) are females and 847 (53.0%) are males.

Table 2 below gives the details of candidates who registered for the examination, those who sat and the absentees for the last five years.

Table 2:  PLE Figures for candidates who sat and absentees

The percentage of absentee candidates has declined compared to previous years.

3.0     PERFORMANCE OF CANDIDATES BY SUBJECT

The performance of candidates in the four subjects is compared over the twoyear period of 2020 and 2019 in Table 3 below.  The performance is indicated at   Distinction 2, Credit 6 and Pass 8 levels.

The table indicates that in English there was an overall improvement in performance at the minimum pass level. Distinction level passes declined slightly but the credit level remained the same. In Social Studies with Religious Education (SST), performance improved at the distinction and credit levels while overall pass level remained the same.  Integrated Science recorded an improved performance at the distinction level, similar to the levels seen before 2019, but the overall pass level declined slightly. Mathematics had a slight drop in performance across all three pass levels. SST remains the best done subject as in previous years.

4.0      COMPARISON OF SUBJECT PERFORMANCE BY GENDER

Table 4 below shows subject performance by gender. The figures are in cumulative percentages at each pass level.

The table indicates the females performed better than the males in English, but the reverse is true for the other three subjects; Social Studies & Religious Education, Integrated Science, and Mathematics.

As we have reported in previous years, candidates’ performance in English and Mathematics tended to be poorer in questions requiring free expression or application of learned concepts in problem solving situations. Candidates performed better in questions that were direct and based on recall.   Examiners again reported good handwriting and organized work presented by candidates. The number of candidates scoring zero in various subjects has generally increased compared to previous year.

The table shows that in 2020, more candidates obtained Division 1 than in 2019. The overall pass levels are comparable between the two years. In terms of numbers, 659,910 candidates passed the PLE compared to 617,150 the previous year.  Overall, therefore, more pupils qualify to join the post-primary institutions than the previous year.

A candidate is deemed to have passed if he/she obtains Divisional grades of                1, 2, 3 or 4.  Such candidates will qualify to register for any post primary examination conducted by UNEB. This Division U (Ungraded) is awarded to candidates who have failed to reach the minimum level of performance that can be awarded at least a Division 4. Such candidates are advised to repeat.

Table 6 below shows performance by divisional grades by funding type.

Overall Performance by gender is shown in Table 6 below:

The Table shows that proportionally males performed better than the females and recorded a lower failure rate.

Table 8 below shows the performance of Special Needs candidates by category and by Division.

Security also arrested some distributors in the districts of Nakasongola, and the greater Masaka areas who were entrusted with delivering the examination papers to examination centres, but along the way, cut the envelopes with a view to access the questions. These will be prosecuted in accordance with the UNEB Act.

In accordance with Section 5 (2) (b) of the UNEB Act No 1 of 2021 the Board will withhold results of 2,220 candidates pending completion of investigations.                   The largest numbers of withheld results are from districts in the Rwenzori region, especially in the districts of Bundibugyo and Kasese. Schools whose results are withheld will be notified through their District Inspectors of Schools.

All candidates whose results have been withheld will be accorded a fair hearing by the Board’s Examinations Security Committee. After the hearings are concluded the Board will publish in the media the list of schools and districts from which results will have been cancelled.

10.0 REPORT ON WORK OF CANDIDATES

The Board gives feed back to its stakeholders.  A Report on Work of Candidates is therefore compiled using observations of Examiners.  Advice to teachers is given.  All stakeholders particularly teachers are urged to utilize this Report.

I would like to join the Board Chairperson in thanking you, Hon Minister for the support we received from you that ensured that we obtained the necessary funds to run the examination during this very difficult time. I thank the Permanent Secretary for the keen interest in the work of UNEB and his being readily available for consultation any time I have needed him.

I would like to thank the Chairperson and Board members for their guidance.

I thank the District leaders; the Chief Administrative Officers, District and Urban Education Officials, monitors, scouts and invigilators for their cooperation and support during the management of 2020 PLE.

Honourable Minister, I wish, in a special way, to appreciate the Staff of UNEB Secretariat. When the future looked bleak with uncertainties; when our personal safety was at great risk, our determination to deliver these results remained undaunted and rose each time we faced the COVID-19 related challenges. We dedicated each activity and each day in prayer in the firm belief that with God nothing is impossible.

Special thanks go to the Inspector General of Police, the Chief of the Defence Forces and other Security agencies for releasing their personnel to support UNEB in ensuring the security of 2020 PLE in the field and at marking centres.   I would like to thank the media for the role they played and continue to play.

I wish to congratulate all the candidates who have passed the examination, the teachers who prepared them and the parents/guardians for their support.

Finally, I wish to thank the institutions that allowed UNEB to use their premises and facilities to mark the PLE Examination despite the fact that the exercise caused an alteration in their school programme.

Results will be uploaded on the examination centre Portals. Each school can therefore download their results as soon as they are officially released. However, when conditions allow, UNEB will inform District and Municipal and City Inspectors of Schools to collect hard copies of the results from UNEB offices at Ntinda. No copies of results are available as of now. Parents, candidates and other interested parties may use the Short Message Services (SMS) on mobile networks which will post results of candidates on their mobile sets instantly.

We wish to warn schools against collecting candidates together to celebrate the results, as this act is likely to spread the corona virus.  Instead, parents and the candidates themselves can use the Short Messaging Service (SMS).