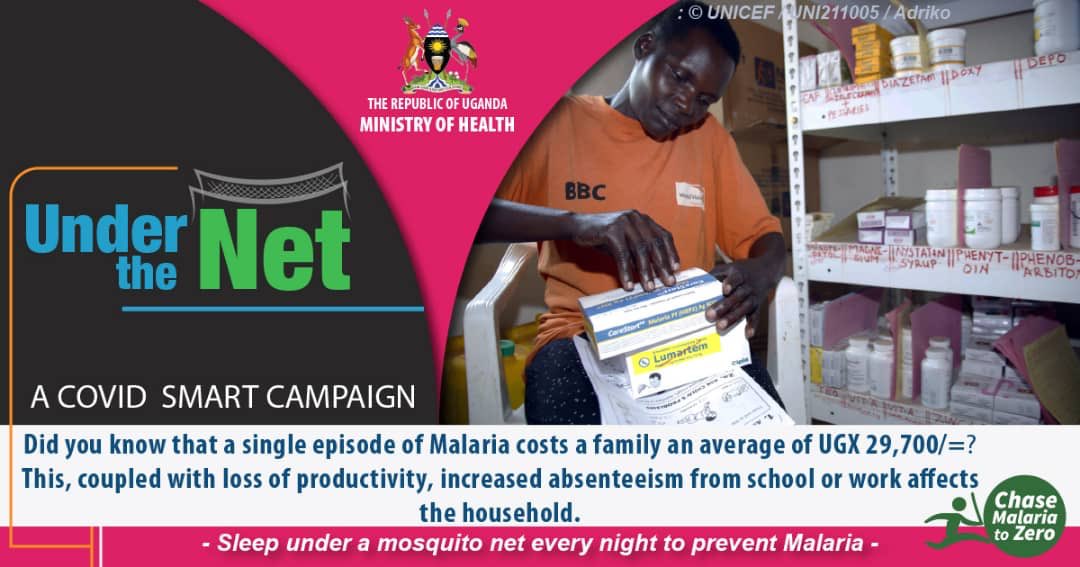 The minister of Health Dr. Jane Ruth Aceng has Wednesday launched the board of Malaria Free Uganda calling it an important milestone in the country’s fight against Malaria.

Africa is home to the largest number of Malaria cases (93% of the global burden), a treatable yet preventable disease. The disease claims the lives of more than 405,000 people each year, largely in Africa.

It is estimated that around 85% of the case burden and 85% of the estimated deaths occurred in 10 countries in sub-Saharan Africa (Burkina Faso, Cameroon, Democratic Republic of the Congo, Ghana, Mali, Mozambique, Niger, Nigeria, Uganda and United Republic of Tanzania) and India.

According to WHO, Uganda has the third-highest number of malaria cases globally (5% of global total).

Minister Aceng noted that in 2018 alone, there were 5.8 million confirmed cases of malaria and that between 2016-2018, a case of malaria was confirmed on average every 3.5 seconds. “This burden reduces the ability of health facilities to absorb new health threats, such as COVID-19” Dr. Aceng said.

She added that in Uganda, malaria is responsible for 30-40% of outpatient visits, 15- 20% of hospital admissions and up to 10% of inpatient deaths. Children under the age of five years old are at the highest risk, accounting for two-thirds of malaria deaths globally, while pregnant women, who are unable to take the most effective antimalarial, are also particularly vulnerable. Yet, the percentage of pregnant women receiving preventative care (IPTp) remains low despite an increase number seeking antenatal care.

“On average, malaria causes 37% of workforce illness and absences, and costs Uganda more than 22 million days of work per year. This is the equivalent of removing 90 thousand workers from the labour force each year. Malaria reduces Uganda’s economic resilience and ability to recover” she said.

Rural households spend up to 25% of their annual income seeking treatment for malaria, resulting in decreased economic stability and am increase in poverty.

But, Dr. Aceng says that despite this heavy burden, significant progress has been made over the recent past due to strong political leadership and commitment from H.E the President, Parliament of Uganda and substantial investment in malaria control. Reported malaria cases declined nearly 45% from about 16,000,000 in 2013 to 6,500,000 in 2018, with parasite prevalence in children.

The minister told the press in Kampala on Wednesday, that the talent and experience they have mobilized to this board from the private and civil society, will help government achieve a significant reduction of malaria cases and deaths in Uganda.

Key Board responsibilities are; to mobilize advocacy for malaria to be a strategic priority across all sectors- public, private, and civil society and at all levels from the head of state down to the head of household; Resources and action, both in-kind and financial, to close the budget gap and enable the full implementation of the national malaria strategic plan; Technical assistance to improve the sustainability of the fight against malaria; and Mutual accountability for making and implementing impactful commitments that will help achieve a malaria-free Uganda.