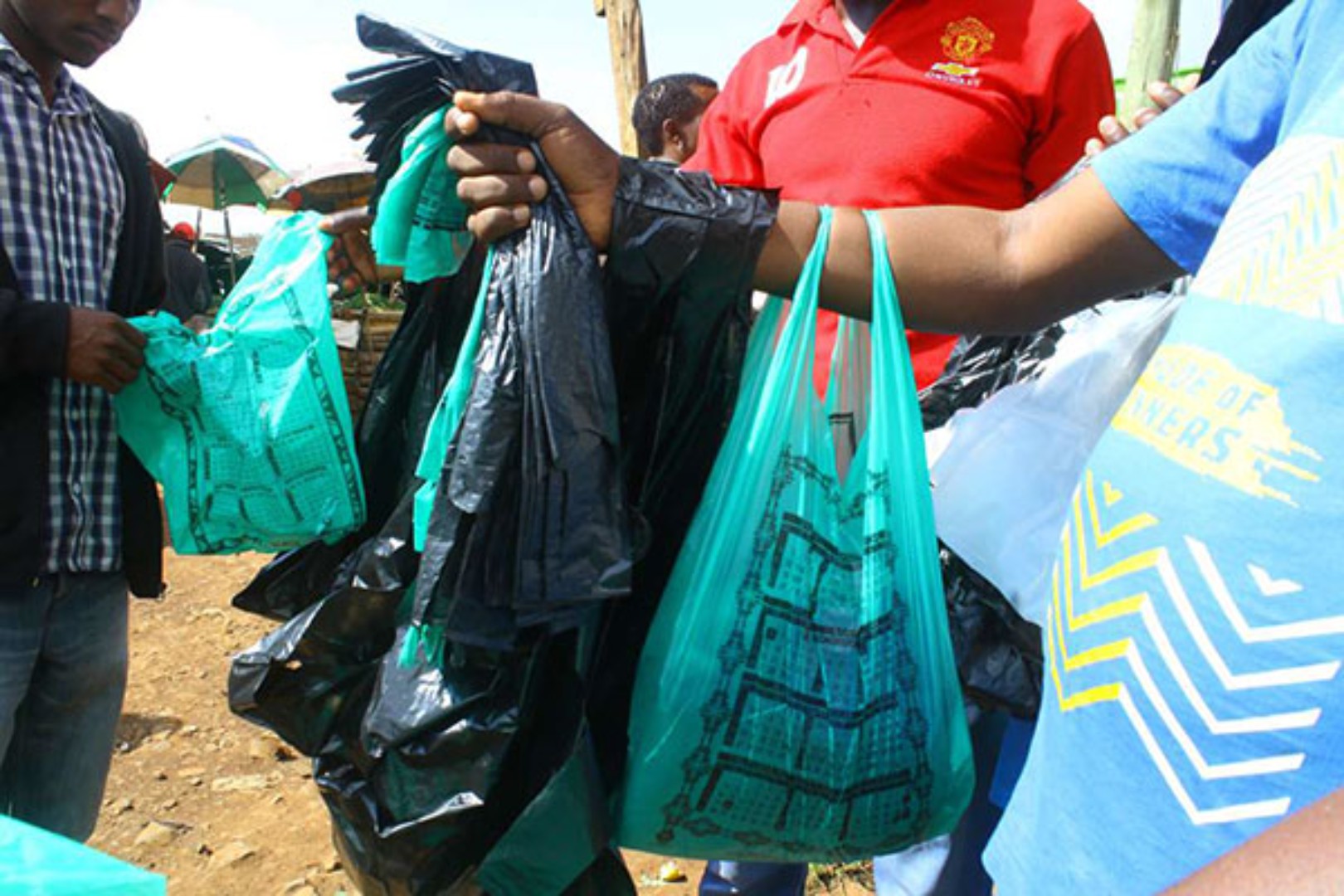 The National Environment Management Authority, NEMA is sent to return to parliament to defend the complete ban of single-use plastic ‘kavera’.

The development was communicated by Dr Barirega Akankwasah the Executive Director NEMA, during the dissemination exercise of the National Environment Act, No. 5 of 2019 which took place at Kabalega Hotel in Masindi on Friday 29/04/2022. The event was attended by Resident District Commissioners, LC 5 Chairpersons, Chief Administrative Officers, and some Environment Officers from Masindi, Buliisa, Nwoya, Hoima, and Pakwach districts.

In April 2015, cabinet constituted an inter-ministerial committee consisting of Ministries of Trade, Water and Environment, Finance and Agriculture as well as NEMA, UMA and KACITA, to process the implementation of the ban pronounced by the Finance Act of 2009, with input from the President.

However, on 2nd October 2018, the then NEMA ED Tom Okurut told legislators on the Natural Resources Committee of parliament that the authority was directed to continue the ban on plastics below 30 microns as it waited for guidance from Cabinet on how to handle other types of plastic materials that are above 30 microns.

Appearing before the same committee on 3rd October 2018, the then Minister for Trade, Hon. Amelia Kyambadde, advised against an immediate ban on kavera, but rather a gradual phase-out of production and use of the plastic carrier bags.

She argued that an immediate ban on plastic carrier bags below 30 microns doesn’t present a clear phase-out strategy by NEMA to handle compensation of workers who could be laid off because of the decision.

“The decision to totally ban the manufacture, importation and use of plastic carrier bags was rushed and there were limited stakeholder consultations,” said Kyambadde.
The Minister was appearing before the Parliament Committee considering the National Environment Bill, 2017.

The Bill sought to repeal and replace the National Environmental Act to make it conform with the existing government policies; continue with the existence of the National Environment Management Authority as a coordinating, monitoring, regulatory and supervisory body on all matters concerning the environment; to address environmental concerns arising out of petroleum activities; to provide for the management of plastics and plastic products.

Clause 75 of the Bill noted that the Minister may, by regulation, prohibit or restrict the import, export, local manufacture, use or reuse of all categories of plastics or plastic products made of polymers of ethane or polythene.

Minister Kyambadde was however siding with manufacturers of kavera who had lobbied for it to stay.

MPs on the committee raised concerns that the Trade Ministry had slowed down the implementation of the ban on plastics.

“We met with the Minister for Environment and officials from NEMA who told us that you did not fully support the ban on plastics,” said Hon. Keefa Kiwanuka (NRM, Kiboga East), the then Committee Chairperson.

Hon. Denis Sabiiti (NRM, Rubanda West County) noted that factories dealing in plastics had been licensed without restrictions on the volume of microns, and asked the minister about the strategy in place to collect and recycle plastic carrier bags [kavera].

Minister Kyambadde said that setting the standard thickness of 30 microns and above for acceptable plastic carriers in accordance with the Uganda standard – US773 would promote best practices of waste management, awareness, collection and recycling of plastics.

The Minister assured the MPs that the Trade Ministry had written to all industries dealing in the manufacture of plastics to ensure proper plastic waste management and set up collection centers.
“We have also assigned officers to follow up these industries and make sure they abide by our set guidelines,” said Kyamadde.

She also suggested that Clause 75 of the Bill be amended by inserting the imposition of a green levy on manufacturers of plastics and plastic products, at a rate determined by the Ministers for Water and Environment, Trade and Industry and Finance, Planning and Economic Development.
“The green levy shall be for the purposes of raising funds to facilitate the management of plastics and plastic products, with an estimated Shs8 billion collected annually for the purpose,” she said.

The Bill was passed following a recommendation from the Committee on Natural Resources. President Museveni assented to the Bill of the National Environment Act on 24th February 2019.

The current NEMA Executive Director Barirega Akankwasah says that it is impossible to measure the 30 microns with one’s naked eyes, making it difficult to enforce the law.

He told RDCs and District Chairpersons on Friday, that the implementation of the clause is largely impractical and the enforcement was also left to UNBS which carries out the testing and approval of the kavera.

However, NEMA currently works together with UNBS to ensure that all kavera on the market is tested. But with the renewed call by Cabinet backed up by the President, Barirega believes the law banning the use of plastics will now pass.

“Cabinet resolved to have a total ban on Kavera. This means we are going back to Parliament to defend the move, amend the law and cause the total ban. This time it will pass because the President has also added his voice,” said Barirega.

In August 2021, the government through Cabinet renewed the call for a total ban on the manufacturing, use, and importation of kavera. Beatrice Anywar the then State Minister for Environment noted that this time around, nothing will frustrate the implementation.

The failure to implement the ban has been attributed to several reasons including corruption, politics, lack of sensitization of the masses and lack of suitable alternatives.

The development has been welcomed by district leaders who promised to ensure that once the law is passed, it will be enforced to the maximum.

The dissemination activity was organized in collaboration with the Wildlife Conservation Society (WCS), a non-governmental, science-based conservation organization which aims at saving wildlife and wild places.

According to Dr David Were (PhD) a Researcher and Assistant Lecturer with the Department of Environmental Management, Makerere University, the use of kavera is dangerous to biodiversity as it is to humans.

He explains that the kavera can last decades if it ends up especially in water, pausing a threat to the fish and humans.

“Back in the day, wetlands and forests worked as catchment areas, stopping the plastics from flowing into the major water bodies. The kavera would get stuck in a wetland which then filters the water and by the time this water makes its way to the lake, it is clean,” says Dr Were.

“But now, forests and wetlands have been cut down and occupied by humans, meaning the plastics flow directly into the lake where they are degraded after decades and turned into small particles that are then swallowed by the fish. This may cause some fish to lack oxygen and die, while the one that remains alive is then consumed by humans who take in the plastic pollutants through the fish, which is dangerous to human life.”

The study was conducted in the Mwanza region of Tanzania, located on the southern shore of Lake Victoria.

During the study, the gastrointestinal tracts of locally fished Nile perch (Lates niloticus) and Nile tilapia (Oreochromis niloticus) were examined for plastics. Plastics were confirmed in 20% of fish from each species by Attenuated Total Reflectance Fourier Transform Infrared (ATR-FTIR) spectroscopy.

A variety of polymer types were identified with likely sources being urban waste and consumer use. Although further research is required to fully assess the impact of plastic pollution in this region, our study is the first to report the presence of microplastics in Africa’s Great Lakes and within the fish species that inhabit them. https://www.researchgate.net/publication/283784536_First_evidence_of_microplastics_in_the_African_Great_Lakes_Recovery_from_Lake_Victoria_Nile_perch_and_Nile_tilapia

Lake Victoria is shared by the three countries of Uganda, Kenya and Tanzania.

Continue Reading
You may also like...
Related Topics:Featured, Kavera