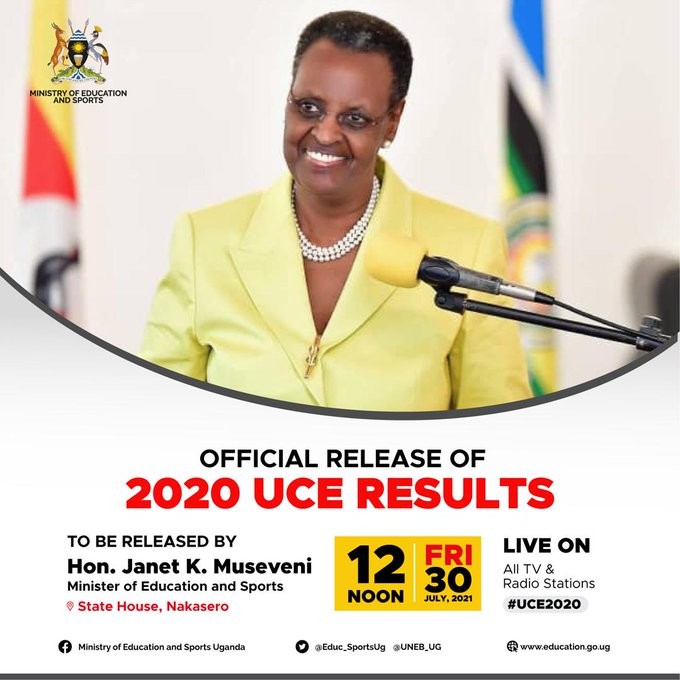 The Minister of Education and Sports, Janet Kataha Museveni will today Friday release the 2020 Uganda Certificate of Education, UCE results.

148,135 of the candidates were funded by government, under the Universal Secondary Education (USE) Program, while 185,754 candidates registered as Non-USE candidates.

On Thursday, UNEB warned unsuspecting Head teachers against conmen that are extorting colossal sums of money from them, under the pretext that UNEB shall withhold the results of such schools due to their purported involvement in various forms of examination malpractice.

“UNEB would like to strongly condemn such acts of extortion by these unscrupulous people, and hereby warns the Head teachers and the general public not to allow themselves to be hoodwinked and exploited” Daniel Odongo the UNEB Executive Secretary said.

Mr. Odongo says that in case the results of schools have been withheld due to suspected examination malpractice, the policy of UNEB is to notify in writing, the affected schools as well as the District Education officials. Thereafter, the affected schools are formally invited to appear before the relevant Committee of the Board to be accorded a fair hearing, after which results are either cancelled or released depending on the verdict reached.

He added that as a Board, they maintain and observe high levels of confidentiality, integrity and professionalism.

“The people masquerading to work on behalf of UNEB, should be reported to us and to police, to ensure that they are tracked, arrested and charged accordingly. We call upon the members of the public to work with UNEB to stamp out these criminal acts that tend to undermine the credibility of our education system. It is a joint responsibility for us all in our quest to conduct valid, reliable, equitable and quality assessment of learner’s achievement in a professional and innovative manner and award internationally recognized certificates” Odongo said.

Justice Remmy Kasule hangs wig after 17 years of service
UNEB withholds over Results of 1,292 candidates due to Malpractice in the Uganda Certificate of Education 2020 Examination
Advertisement