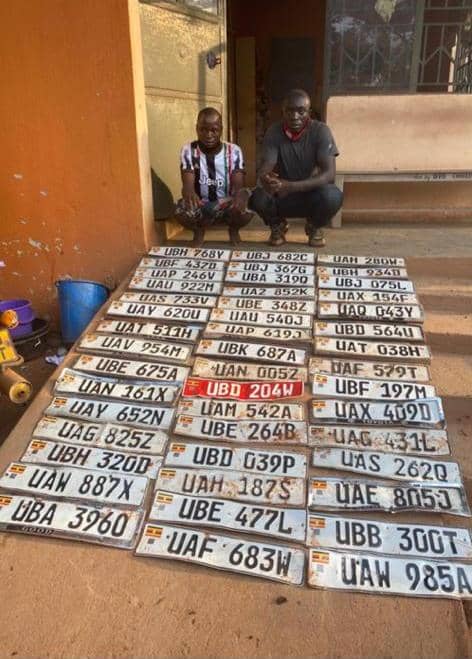 The police at Lubowa have Tuesday arrested two suspects who have been tereorizing residents, stealing vehicle number plates.

The operation followed complaints to police from the affected communities.

“After plucking off the car licence plates, the suspects would leave their mobile phone contacts on the vandalised car, which the victims were expected to call for details about the whereabouts of their motor vehicle plates. When the victims call the suspects’ mobile phone number, the receivers tell them to send them money first before they reveal to them where they hid the licence plates” Owoyesigyire says.

Police tracked down the suspects using the new technology acquired to fight crime. The suspects were arrested from areas of Seguku and Namasuba. They later led the police where they hid the licence plates.

At least 46 different number plates were recovered and verification of the owners of the licence plates is ongoing.

“Our crime database show that the duo were arrested before on the similar offence of stealing from motor vehicles and remanded to prison. They started from where they stopped upon release from the prison” he added.

They will be arraigned in courts of law again as soon as investigations are done.