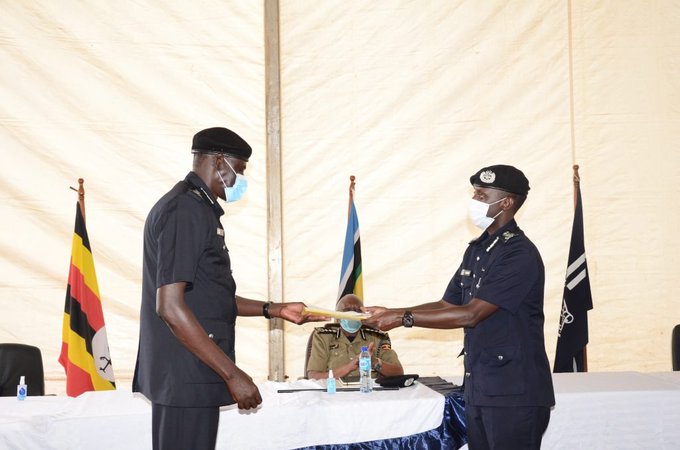 The Inspector General of Police, IGP Okoth Martin Ochola has Monday presided over the handing and taking over ceremony for the office of the DIGP, which took place at Police Headquarters, Naguru.

In his opening remarks, Ochola applauded the outgoing DIGP, Major General Sabiiti Muzeyi for the job well done, describing him as a true leader and a man of integrity.

He urged him to remain an Ambassador for the police and always take time to call upon them at any time. “To the police management team, he will always be remembered for standing up for what is right.”

Ochola also welcomed the new DIGP, Major General Paul Lokech, whom he asked to take time to learn about the organization and familiarize himself with the various dimensions of the police force.  He added that the incoming DIGP brings with him extensive knowledge, experience and proven leadership, the attributes that are commensurate with his new role.

He noted that the policing philosophy of the force, balances the foundation of traditional policing with innovative and progressive methods, to help maintain professionalism and a quality of public safety that the public deserves.

“Our emphasis therefore, is going to be protecting life and property and promoting rule of law.  This will help improve our community relations” IGP said.

The outgoing DIGP thanked H.E. the President for the opportunity to work in the police and also thanked the IGP and all Directors for the respect, courtesy and good working relationship accorded him over the last two years and 10 months that he has been the DIGP, arguing that it helped to bring out the best in him.  He further described his successor as a Chief of good Character, who has a strong reputation in the policing of communities.  He welcomed him to the new office and wished him success.

The incoming DIGP, Major General Paul Lokech also thanked H.E. the President for his appointment.  He also thanked the IGP, the outgoing DIGP, and all Directors for welcoming him into the force.

In his remarks he added that he was not an expert, but pledged to work with the Police Management to embrace initiatives aimed at improving further the image of the force and service delivery.  Lokech further thanked his predecessor for giving him the tools necessary to prepare for his new position.

And added that it was his job to continue with the mission to protect life and property, promote rule of law, and build stronger partnerships with the public and other stakeholders.

All the Directors wished the outgoing DIGP success as he returns to the UPDF, and pledged to work with the incoming DIGP, and embrace new initiatives aimed at better service delivery.

The hand over happened at the SFC headquarters in Entebbe.