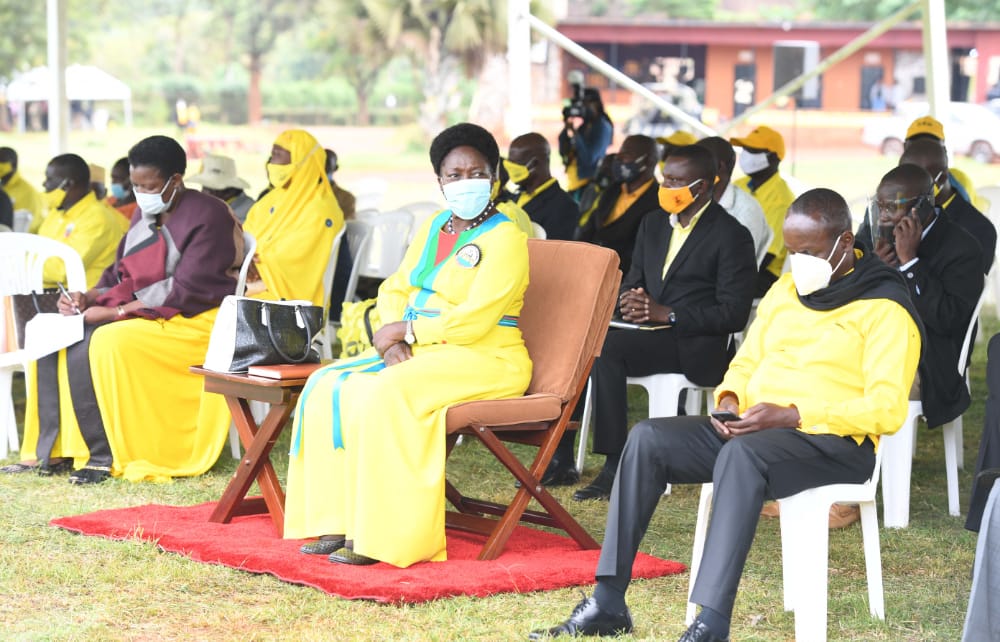 The people of Busoga sub-region in the Eastern part of Uganda have applauded the NRM government under the leadership of President Yoweri Museveni for the development programs in their area especially the good road network in the region.

“The road from Musita to Mayuge road the 54 kilometers industrial and city roads to be worked on and other roads that have been earmarked will spur the economic growth across Busoga sub-region,” they noted.

This was contained in the memorandum by the leaders of the districts of Mayuge, Luuka and Jinja read by the Minister of State for Agriculture Hon. Aggrey Bagirye at a meeting held yesterday at the Agriculture Show Grounds in Jinja City with NRM Presidential flag bearer President Museveni.

The leaders also noted that other programs like emyooga (SACCOS), youth and women funds, industrial parks and the livestock farms among many others will help the people of the area get out of poverty.

They further observed that with the development and growth of Uganda and Africa and the fight against pandemics like COVID-19, Busoga and Uganda in general will continue to be secure under the leadership of President Museveni and the NRM government.

The Busoga sub-region leaders assured President Museveni of their solid support in the forthcoming elections to allow the continuity of development in the country for the next 5 years.

The Mayor of Jinja Hon. Titus Kisambira in his welcome speech also pointed out that the only person who can secure the future of this nation and Africa is President Museveni.

“You are there for us, you are a nationalist and a pan Africanist, we cannot afford to lose you Mzee. We will support you so that you continue to take this country and Africa forward,” he said.

In his address, President Museveni said that running society is a science because if matters are not done correctly, you end up with wrong results. The President cited the recent riots by some groups that had vowed to make Uganda un-governable, noting that these groups tried to cause trouble but got the right medicine and will never attempt again.

“This Bobi Wine was trying to create some drama by going to the electoral commission, but nobody accompanied him because they now know the truth,” he said.

He said that if the government did not have a strong security system they would have done a lot of damage.

President Museveni acknowledged that the youth have socio-economic problems but added that their concerns can be handled and will become peaceful once sorted out.

“The youth are not hard to deal with, they are being misled by infiltrators who are being used by foreigners and we know them. Their problems are not tribe or religion but socio-economic,” he said.

The President said that government sent to Busoga region shs. 17 billion for the youth livelihood program to cover the last 4 years but the number of those who benefitted is so small compared to the large population of the youth now in the region of about 3.5million.

Candidate Museveni urged the leaders once in Parliament, to help him in the allocation of more resources to such funds to realize an impact among women and the youth.

He also called on the leaders to fight corruption done by some officials who ‘edit’ the youth money before it reaches the recipients.

Mr. Museveni further urged leaders to encourage their constituents to get engaged in modern commercial and calculated agro-production for both food and financial security.

The President pledged to handle some of the concerns raised by the leaders of the region like the issue of sugar. The NRM Presidential flag bearer called on Busoga leaders to inform the electorate that NRM has played a unique role in Uganda.

“Tell the people that we have succeeded because of the correct policies of NRM, tell them to support our party so that it continues to do better things for the country,” he said.

President Museveni told delegates the root causes of the problems in Uganda and Africa and how NRM through her wisdom diagnosed the challenges and has correctly prescribed the right medicine that  is putting Uganda back on its feet.

The Speaker of Parliament the Rt. Hon Rebecca Kadaga raised some concerns by the people of Busoga region one of them being the issue of sugar.