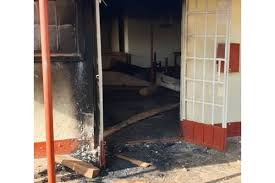 Court heard that the 10 suspects and others at large on 18th November 2020 at Wobulenzi town council attempted to influence the release of NUP Presidential candidate Robert Kyagulanyi Ssentamu without due regard to safety to the property directly involved in the attack by burning government vehicle registration number UG 1313W and attacked public officers.

They are also accused of burning a motor vehicle UAJ 972X, setting ablaze Wobulenzi Grade one court and attacking Special Police Constable Hannington Sekajugo who was guarding the premises which contravenes sections 7(1) (b) (2) (b) and 7 (1) (b) (2) (c) among others of the Anti-Terrorism act 2002.

The Grade One Magistrate Doreen Ajuna, didn’t allow the suspects to enter a plea since she had no jurisdiction over the offences and remanded them to Sentema Prison until December 22 this year when they return for a mention of their case.

The Magistrate also issued a production warrant for 21 NUP supporters who are on remand at Kitalya Prison on charges of common nuisance and disobeying lawful orders.

These were arrested from Wobulenzi and Luwero town councils during the protests following the arrest and detention of Kyagulanyi.

The Magistrate ordered that the suspects be brought to Luwero Magistrate Court on Monday December 7.