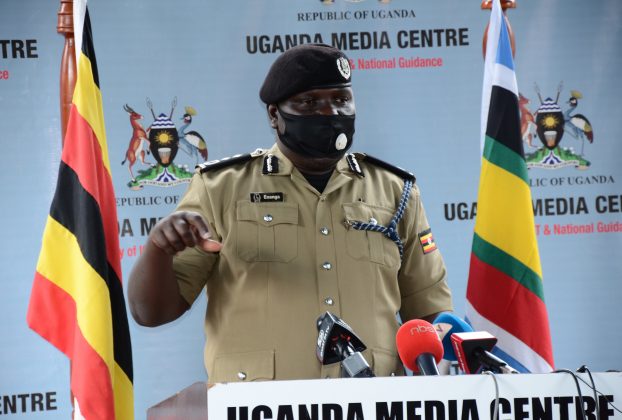 Uganda Police Force has clarified that that a total of 28 people have died and 577 arrested following the violent political and criminal demonstrations, in multiple areas since 18.11.2020.

Police Spokesperson Fred Enanga the police spokesperson says confrontations began after the arrest of Hon. Kyagulanyi Ssentamu Robert in Luuka on Wednesday at Luuka District, due to what police calls his continued blatant disregard of the Electoral Commission guidelines, which were further escalated after bloggers posted ‘FAKE NEWS’ that he had been killed.

According to Enanga, the NUP cell at Kisekka market began the protests with the burning of tyres and the protests spread to some other areas. “All indicators reveal that these events were not just impromptu actions, but pan of a loosely coordinated campaign by the political group in the areas of Central Region, Kampala Metropolitan (Kawempe, Rubaga, Makindye, Nakawa, Kira Municipality,’ and Wakiso, Greater M.aka, Busoga and Elgon” Enanga said.

Enanga says a total of 577 suspects were arrested, some of whom appeared in court on the 19.11.2020, while others are expected to appear today, including the Hon. Kyagulanyi Ssentamu Robert.

According to the police spokesperson, most of the arrests involved suspects from the KMP area where the NUP cells were mostly created, followed by Masaka and Mityana, while the remaining group of suspects were from Busoga and Mbale respectively. Several exhibits including bows and arrows, piles of stocked tyres, bottles, deans of fuel and evidence of mobile money transactions funding the rioters.

“The violent demonstrations were being coordinated by a group of three hundred (300) ring leaders who were actively coordinating the distribution of tyres to their flash points and hotspots, using Motor vehicles and Bode bodes.

Police arrested some of the ring leaders including; Malingolingo Nkedi contesting for councillorship in Nansana Municipality, Machete Ashraf, and the commander freedom bodabodas who are about 50 in number, Nusfa Nakato, a candidate for councilor scat at KCCA 4. Kulya Saul — KCCA councilor Kawempe North, Rodha alias Maama Kampala mobilizer for NUP cells in Bwaise and Kyebando industrial arcade, Bagonza Thomas, the NUP candidate for councilor seat Bwaise II, in Kawempe, Mathais Walukagga, mobilizing in Busoga Region. We also have other ring leaders, who were captured on CCTV cameras and other videos uploaded on social media and widely circulated.

“Therefore, what we have men in the last two days i.e., the violence, vandalism looting, intimidation and threats, are crimes that were being committed targeting people who are not pro-NUP and also against people’s property. Now this is something that we shall not tolerate. As you all know, the Joint Task Force, respects freedom of assembly and people’s democratic rights, but will NOT allow for violent demonstrators and criminal opportunists to disrupt the peaceful environment, we have had over the years. We have stepped up presence of our security personnel and minimized the use of teargas which is indiscriminate in nature and resorted to the use of batons which are more specific” Enanga said.

He noted that the task team of the investigators continues to pursue investigative leads and also monitor online hate speech related to the violent demonstrations. Therefore, those who continue to encourage rioting and threaten individuals on account of their tribes and beliefs etc, across Facebook posts, Twitter, Instagram and Whatsapp will be attended to by the police cybercrime teams.